A taste of Santorini 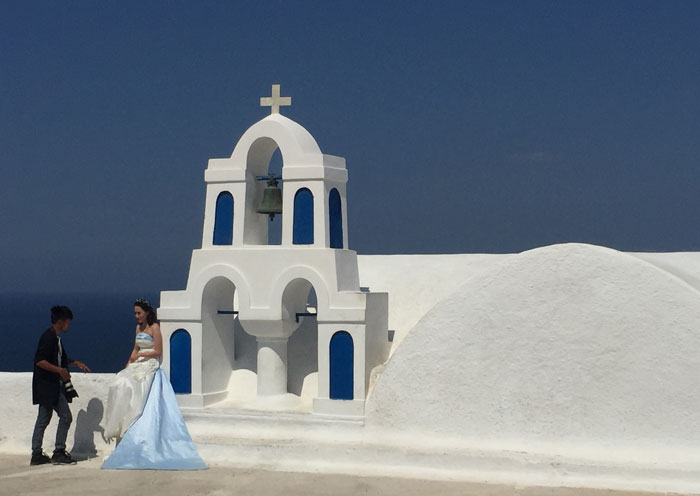 However much you read about Santorini, or pore over the pictures, nothing quite comes close to being there.

Life feels precarious. It’s as if human toil and existence survive on a knife edge, a razor-thin strip of habitable land that teeters between a fiery lava pit and the cold depths of the Mediterranean sea. Even the wines have a nervy, on-edge feel to them – the intensely saline, mineral-laden style seemingly imbued, via the ashen soil, with the memory of violent tectonic upheaval and befuddling sea mists.

It’s also a place that can make writers self-indulgent. So let’s just say it’s right up there as one of the wine world’s most memorable destinations – not just for the views but also for the wines.

Here are a few pictures, thoughts and tasting notes from our visit.

THOUGHTS ON SANTORINI & ITS WINE

Is Santorini Assyrtiko the ultimate food wine? Its peculiarly salty, mineral style, together with brisk acidity and good structure, went with almost everything we tried, from black olives to lamb, pork and anchovies.

On a foodie note, Santorini is delicious. Octopus, tomatoes, capers, fava beans and nuts are all local specialities. One of our favourite dishes was char-grilled octopus with caramelized onions and lemon fava bean puree. 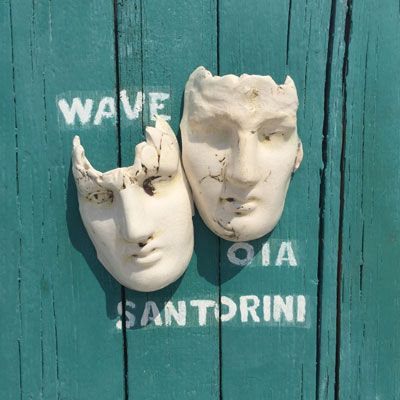 Santorini should be helped to grow its wine production. From what we heard, there is currently a shortage of grapes and demand has seen prices pushed up to €2.5 per kilo.

There are many barriers to growing the local vineyard, including a complex land ownership structure, EU bureaucracy, the hardship of the work (much of the available land is steep and terraced) and the easy profitability of using land for tourism development. But none of these are insurmountable.

Santorini’s vineyard used to be much larger than it is today; the wines are glorious and in demand. We’d like to see more of them.

Harvest is very early in Santorini. It’s usually the first week of August and some reds, counter-intuitively, are even earlier – Haridimos Hatzidakis often picks his Mavrotragano in July. But the grapes are ripe – Assyrtiko regularly sits at 13.5-14% alcohol and the level of malic acid tends to be minimal.

Of course, this is largely because it’s hot and dry, so the plants are stressed and keen to ripen their fruit as quickly as possible. But there’s also another theory as to why the vines can ripen their fruit so early – and it’s to do with the fact that vines on Santorini are planted on their own roots. This is rare in the wine world, where the root pest phylloxera has meant that most of the global vineyard has to be grafted onto resistant American rootstock. But Santorini’s sandy, volcanic soils don’t suit phylloxera – and it’s suggested that this may be one of the keys to successful early ripening.

Santorini Assyrtiko should be bottle aged. When young, the wines are naturally acidic and subdued in aromas. That’s fine – they’re very drinkable at this stage – but they gain so much with a bit of bottle age, developing complex aromas and gaining profundity and texture.

It would be great to see some producers holding back a portion of production to sell as a late-release. The problem is that they can sell their productions easily so there’s little incentive to do this. But they would be fully justified in charging a higher price and it would give people a different picture of this wonderful wine. We’d be first in the queue. 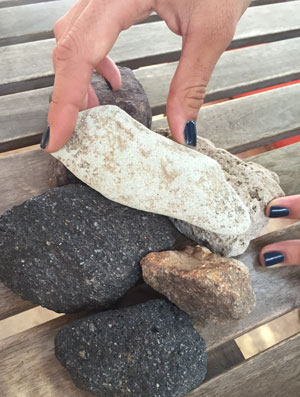 Santorini isn’t just about about one style of wine. Experimenting with lees contact and oak is happening to good effect with Assyrtiko – the best examples accentuate the grape’s naturally flinty, stony character while adding complexity and richness. This is not a variety to lavish with sweet-tasting creaminess.

The best reds, often featuring Mavrotragano or Mandelaria, are juicy, with grippy tannins and a certain engaging wildness to them. (The worst are overdone and blandly international.) Like the Assyrtikos, they can also benefit from bottle age.

The gloriously sweet, sticky Vinsanto used to be drunk on the island before (or even instead of) breakfast for energy and inspiration, according to our local source. We enjoyed it as a pre-dessert appetizer in restaurants. The wine is made by picking Assyrtiko (often blended with Aidani) ripe then drying the grapes in the sun and ageing the wine in barrel. It’s not fortified, so the alcohol isn’t too high, and comes with raisined, muscovado flavours – and always that underlying vibrant acidity and saline character.

Finally, Nykteri is a category in search of a destiny. Apparently it used to be a late-harvested white aged extensively in barrel, frequently under flor, giving it a style similar to Vin Jaune or dry sherry. These days, though the style varies according to producers, it tends to be a late-harvested, rich, oak aged white based on Assyrtiko. We’d love to see the traditional style revived – apparently Sigalas is keen.

Santorini is a busy place – often, too busy – because it’s so beautiful. It also has a vibrant local food scene. Our favourite restaurants were Red Bicycle (blaring out Maria Callas over the caldera over delightfully inventive food) and 1800. Wine tasting by the beach in Santorini is one of life’s great experiences – Gaia’s former tomato factory winery is a great case in point. 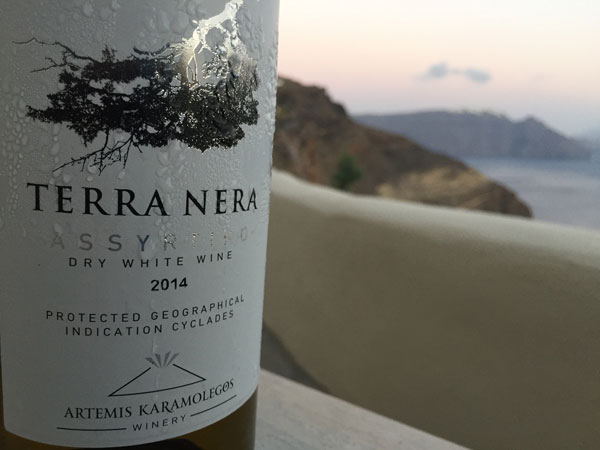 Gaia Assyrtiko Wild Ferment 2014, Santorini, 13% (PR & SB: 8/10, Sept 2015) – oak ageing Assyrtiko is a fine art – if the oak is overly creamy and sweet it clashes and overwhelms the salty, tangy, mineral force of the grape. Here, though, though the oak is evident, it merely accentuates the flinty, mineral side of the Assyrtiko, all the while adding extra layers and complexity. It’s vibrant, crystalline, rounded – stern but not austere, beautifully craggy and poised. Fabulous value for money.

Sigalas Vinsanto 2005, Santorini, 9% (PR: 8/10, SB: 7.5/10, Sept 2015) – 75% Assyrtiko and 25% Aidani grapes dried in the sun and then aged seven years in old barrels. It’s rich (with 200g/l sugar) but also very precise, a rare feature of these wines. Lovely raisined, muscovado flavours with juicy acid and that salted caramel lick on the end. Compelling stuff, real length, focus and persistence. Hedonism through the prism of a maths professor.

Hatzidakis Assyrtiko Cuvée No 15 2014, Santorini (PR: 7.5/10, SB: 7.5-8/10 Sept 2015) – Haridimos Hatzidakis follows organic (and also biodynamic) practices in his own vineyards, and this is his certified organic Assyrtiko. (He does buy some grapes in for this wine but from other organic vineyards.) He claims that organics gives lower yields and better concentration of flavour – something this wine demonstrates. It somehow tastes brighter, more vibrant and dynamic than his straight Assyrtiko, while still exemplifying all of this wonderful variety’s charms. Lovely stuff.

Sigalas Assyrtiko 2008, Santorini, 14.2% (PR: 7.5-8/10, SB: 7.5/10, Sept 2015) – wonderful golden hue and aromas of honeycomb, mushroom and roasted peach. The alcohol is slightly invasive but it has beautiful harmony and cogency. Lovely breadth but also savoury focus to it. Would be fabulous with cheese. Proof that good Assyrtiko should be given the time to age. But do we have the patience? 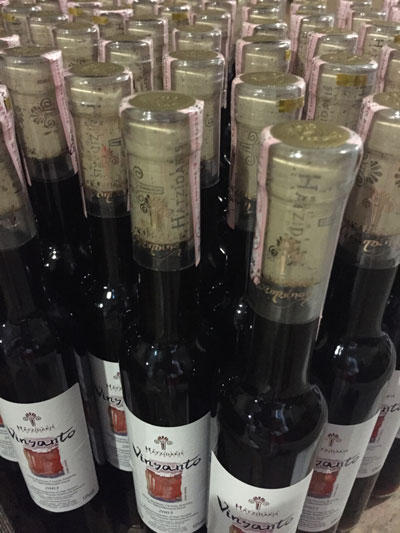 Sigalas Assyrtiko 2011, Santorini, 13.7% (PR & SB: 7.5/10) – we were treated to a mini-vertical of this wine at Sigalas. The 2014 (as below) was benchmark; the 2013 was a bit richer and less taut, lacking a certain edge to it. The 2008 was rich too (see above) but glorious in age, and this one sat delicately and discreetly in the middle, a beautiful wine showcasing Assyrtiko’s ability to age and develop in the bottle. Pithy, smoky, dried herb nose – bottle age really brings out the aromas in the grape, which are muted when young – leads into a fine-etched, spicy and savoury flavour profile. Could be a tiny bit longer but very impressive.

Sigalas Nykteri 2012, Santorini, 15% (PR & SB: 7.5/10, Sept 2015) – Nykteri is a recognized appellation in Santorini but one that inspires much confusion. Apparently, it used to be harvested late in the season, pressed by foot the aged in barrel for years, often developing a flor and thus acquiring a character akin to sherry or Vin Jaune. These days, the law merely states it must be based on Assyrtiko and be aged for at least 3 months in barrel. The resulting styles are varied, hence the confusion. This one has 9 g/l sugar and high alcohol but holds it well – with layers of honeycomb, creamy intensity working well with the tangy acidity and salty flavours. It’s almost like a savoury version of salted caramel. There’s a touch of oxidative character that suits it well – which makes us think it would be great to see a revival of the flor-aged style. Apparently Paris Sigalas is keen to recreate this at some stage.

Thalassitis Assyrtiko 2014, Santorini, 13% (PR: 6.5-7/10, SB: 7/10, Sept 2015) – pleasant, mineral style, relatively restrained on the nose but comes into its own (like all good Assyrtiko) on the palate. Good texture, salty weight and grip. Surges, volcanic style, out of the depths of the glass. Copes even with black olives.

Hatzidakis Mavrotragano 2013, PGI Cyclades, 14% (PR: 6.5-7/10, Sept 2015) – decent red wines from Santorini are relatively rare but this is a very good example. Slightly rustic and edgy in style, it has grippy, bittersweet earthy cherry flavours and textures. It needs food but it sits in that very digestible style not a million miles away from Chianti. 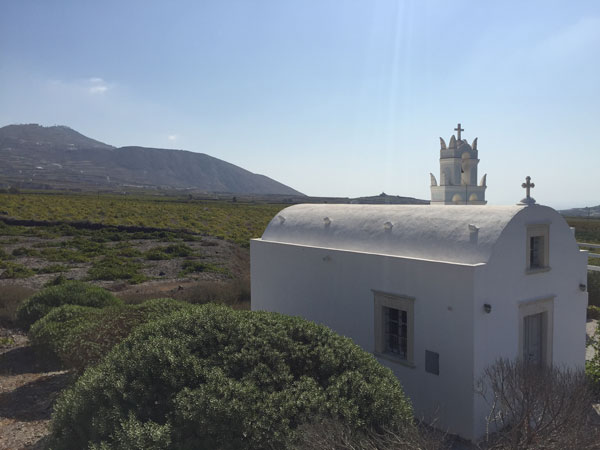 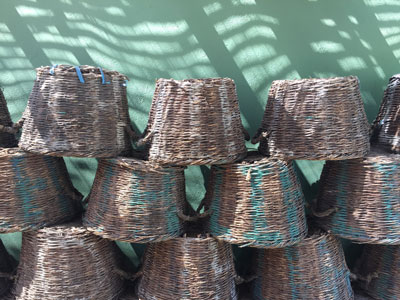 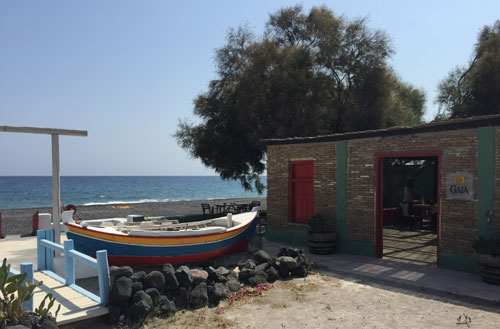 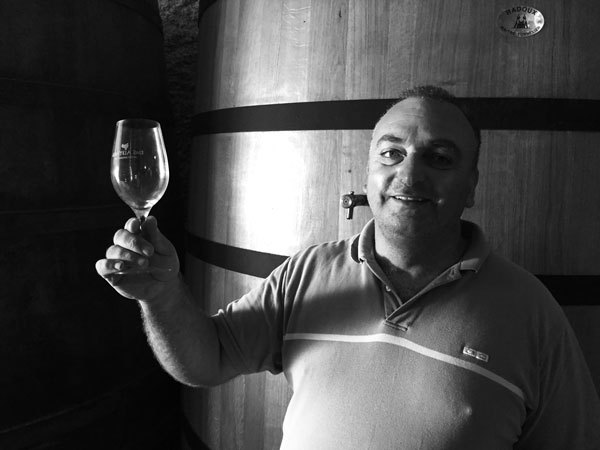 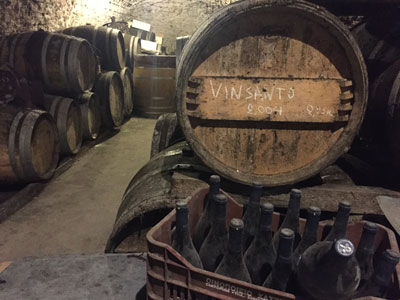 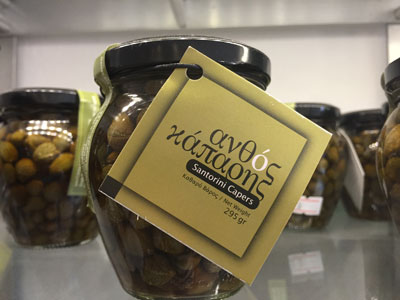 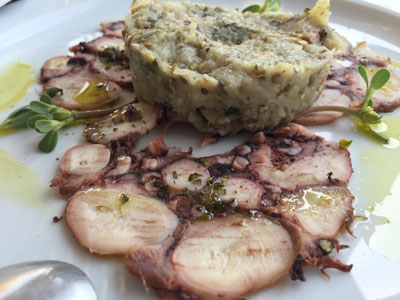 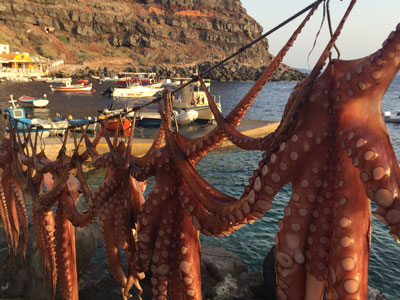 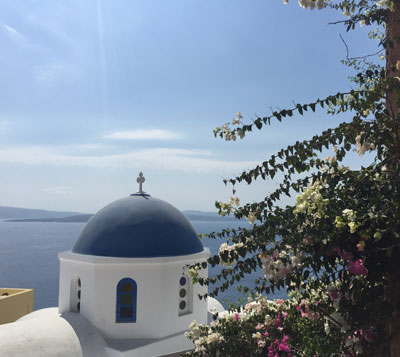 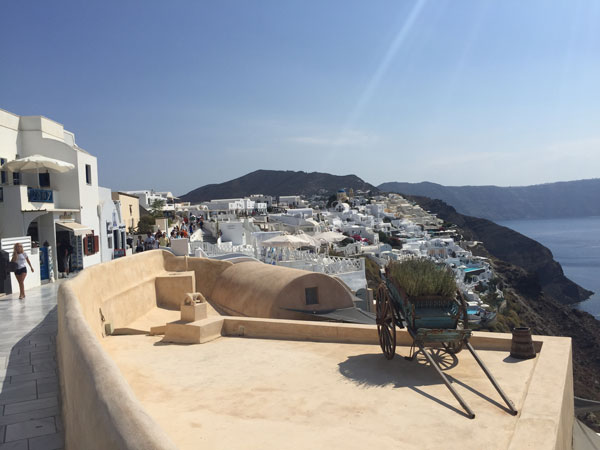 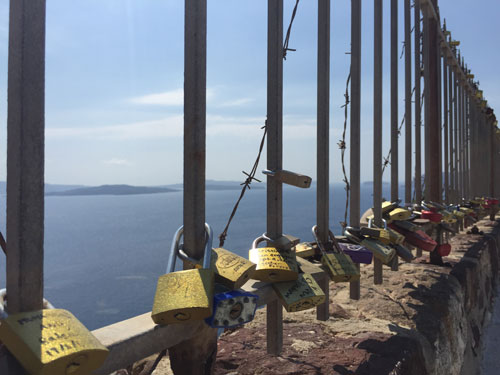 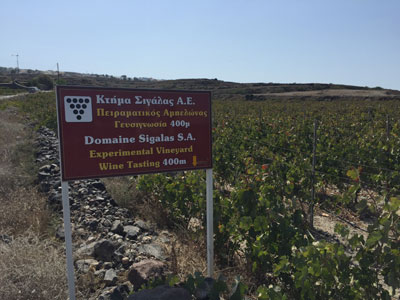 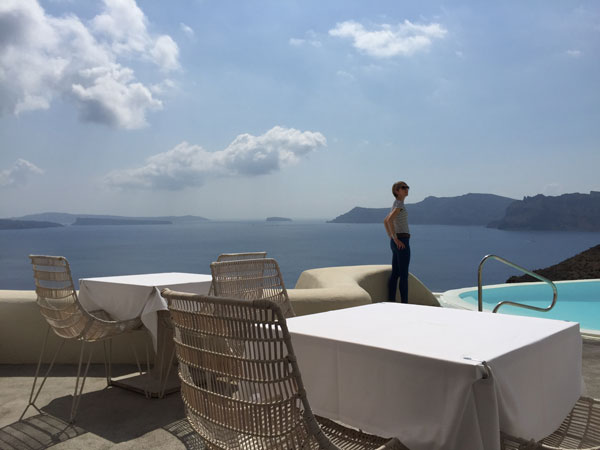 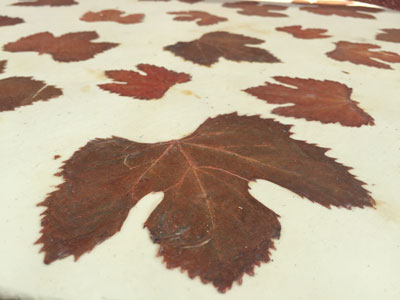 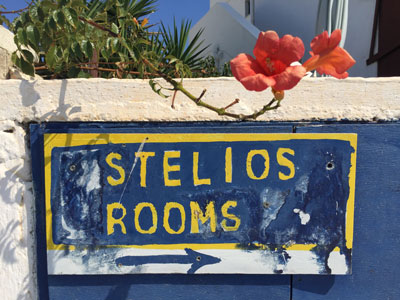 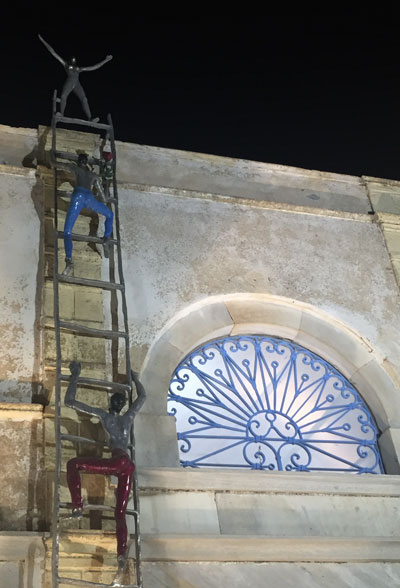 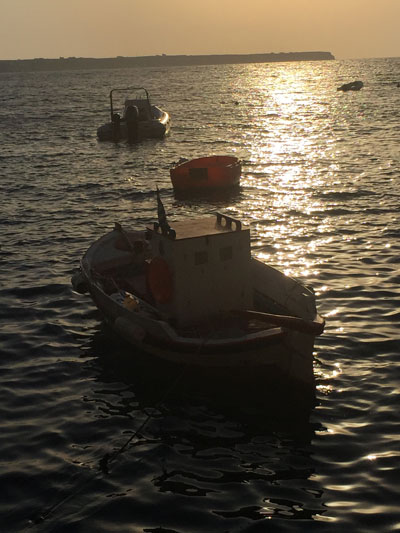 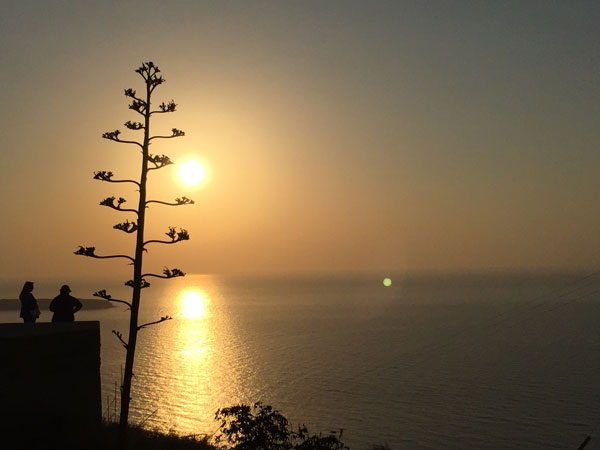