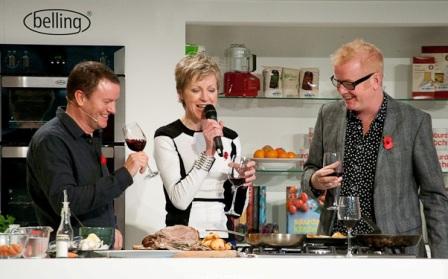 What do you call a day when you get to chat Teroldego with Chris Evans, wear Olympic gold and silver medals, cuddle Bill Granger, host a brilliantly named Drinks Theatre, talk ‘guess the wine’ with Michel Roux Jr and generally pig out?

Yet again we had a blast at this most delicious of events, this time on debut in London at Olympia.

Backstage was lots of fun, with the Supertheatre sponsor Plenty (think: kitchen roll) providing some serious entertainment in the form of its larger-than-life character Juan Sheet (geddit?) 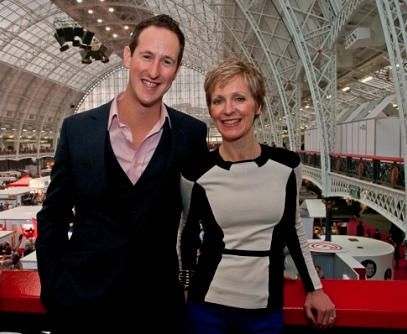 Chris Evans was doing his bit for Movember as well as making for a hugely entertaining (and unexpectedly interactive) series of Saturday Kitchen Supertheatre shows with Susie.

We talked wine and food with Michel Roux Jr, surely the most hard-working man in gastronomy right now. It was great to hear his take on wine (‘I’m very open-minded so I don’t mind where it comes from, but it has to be good quality’). And we were personally very chuffed to hear he tunes into Saturday Kitchen and has a go at guessing our wine choices for the dishes (though it appears either we’re predictable or he’s very good – apparently he gets it right 90% of the time…)

Olympic gold- and silver-medallist Zac Purchase was delightful company – and kind enough to let Peter try on his medals. He and his lovely new wife were also surprisingly illuminating (and precise) on the subject of dunking biscuits in tea…

Culinary superstars Theo Randall, Pierre Koffmann, Bill Granger and Vivek Singh were all on fine form, cooking up some sensational dishes while entertaining the crowds. We’ve had requests to let you know which wines we paired with the various dishes – they are as below (they’re all from Tesco, sponsors of the Supertheatre):

We also hosted sessions in the Drinks Theatre at the buzzy Wine Show, which was taking place upstairs (a delightful combination). Some standouts from the wines we showed there included:

We can’t wait for the end of the month and the big one – the winter BBC Good Food Show at the NEC, Birmingham. Do come and join the fun – we’ll be on stage alongside many of the names above plus the fabulous Michael Caines, Tom Kerridge, Lawrence Keogh, Glynn Purnell, Galton Blackiston, Atul Kochhar and Sarah Millican. Click here for more details or to buy tickets.

You can have a peek at a few more photos from the event, both of and by us, on our Facebook album. Thanks to David Tickle and Jools at 255 Photography.