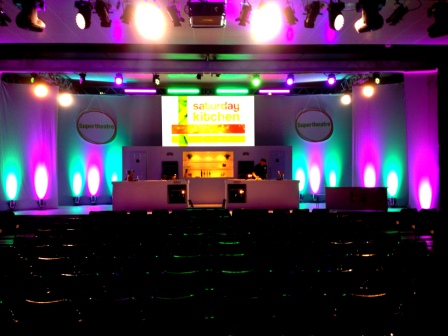 A group of young girls accosted me when I was just coming off stage at the BBC Good Food Show in Bluewater, to have a photo taken.

‘Have you tried the new one?’ piped up the smiley blonde ring-leader, visibly excited. ‘It’s amazing, you just can’t taste the alcohol!’

I stopped her to ask what she was talking about. ‘The new cherry Lambrini of course!’

This, along with many other moments too numerous to mention, made for a brilliant, buzzy, funny and hugely enjoyable day at the brand new Spring BBC Good Food Show, held in Bluewater in the garden of England.

I was appearing on the super-theatre as part of the Saturday Kitchen stage show, as well as hosting the Interview Stage, chatting to the likes of Gino d’Acampo, James Martin, Tom Kerridge, Lawrence Keogh and Great British Bake Off winner Jo Wheatley.

Doing the interviews was great fun. The research in itself was fascinating, but then being able to chat with a live and interactive audience to the stars of the show was brilliant. I tried to unearth at least one nugget in each slot, with the following results:

For the Saturday Kitchen stage we had the wonderful, musical Jimi Mistry as our guest, while Tom Kerridge was cooking blow-torched mackerel with beetroot and redcurrant and Lawrence Keogh rustled up a classic sole with potted shrimp butter.

There were some great moments when James Martin couldn’t get his pizza off the paddle, and Lawrence Keogh couldn’t skin his fish – the joys of a live show (and perhaps some stitching-up going on back-stage..?!)

A full listing of the dishes, and the wines I chose to match with them (all of which came from Waitrose), are as follows:

Thanks to everyone – including the Lambrini girls – who came to watch the shows and say hello. And do book into the new BBC Good Food Show London, when Susie and I will be on the Drinks Theatre and super-theatre with Saturday Kitchen all day on Saturday 10th November. Click here for more details.