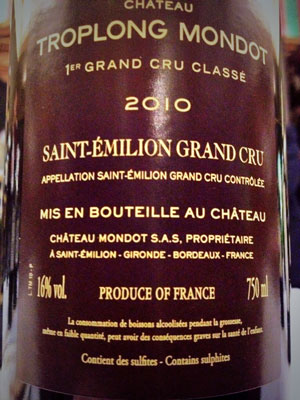 For a supposedly great vintage, 2010 is pretty variable.

I guess it depends what you like. Being creditable, you could say there’s something for everyone in this vintage. If you like your claret thick, ripe and full-throttle then there’s plenty of that in 2010. But if you’re after elegance, balance and nuance then you have to search for it.

The issue is not so much one of weather but attitude. A long, dry, relatively benign growing season meant growers had options at the end of the season, which isn’t always the case in Bordeaux. Cool nights in August meant slow ripening and decent retention of acidity and aromatic complexity. Especially on the right bank with the earlier-ripening Merlot, producers could wait and pick super ripe fruit and high potential alcohol.

But the real secret to success in this vintage was not getting over-excited, and knowing just when to harvest in order to achieve not just intensity (easily done in 2010) but balance. Drinkability, refreshment value and food-friendliness seem under-rated qualities in wine these days, especially in pricier reds.

When I tweeted the photo (above right) of Troplong-Mondot’s back label featuring 16% alcohol, it was met with widespread consternation. The chateau itself eventually tweeted an invitation to ‘come and visit’ so they could ‘explain our viticiultural philosophy’.

But it’s not just about alcohol levels. Ultimately, it’s about balance, and it comes down to personal taste. I’m not a fan of big, thick wines, as my notes below make clear. And with many of these wines charging top dollar, it’s a potentially expensive mistake to make.

Cabernet Sauvignon performed best, and most consistently in this vintage. Those wines dominated by Merlot were far more variable in quality, all too often overdone and hard to drink. There didn’t seem to be much consistency within communes, it was more about how individual producers responded to the conditions.

Château Lafite-Rothschild 2010, 13% (9.5/10, PJR, 5.11.2014) – just so darn classy. Utter lack of flamboyance. Serene. Distinctive. Stunning. Elegant, beguiling aromas with hints of sandalwood, wood smoke and cassis. It’s fluid, silky and focused. Great poise. Savoury, svelte, not big in any way. Almost austere on the finish, when it drops away very slightly, but this should hopefully flesh out in time. Will be fascinating to see this one evolve. My wine of the vintage.

Château Angelus 2010, 15.5% (8.5-9/10, PJR, 5.11.2014) – yes it’s big and slightly shocking in some ways but it has the gravitas to carry it off. It’s spicy, bold and serious. Really complex, with notes of candle wax, ripe plum and cedar. The palate is fine, grippy and savoury, with firm bones and grounding acidity carrying the thing. A roller coaster of a wine.

Château Léoville-Poyferré 2010, 14% (8/10, PJR, 5.11.2014) – a wine that lives on the edge. Extravagant, almost Baroque style. Won’t be for everyone. Edgy, meaty, high-toned aromas. Some tobacco too. An exponentially proportioned flavour profile sees fine firm tannins and juicy acidity give way to a powerful spicy crescendo. Full-throttle stuff!

Château Mouton Rothschild 2010, 13.5% (8/10, PJR, 5.11.2014) – almost the diametric opposite of Lafite. It’s big. As ever, very fine, complex and pretty thrilling. But in its broad shoulders and forceful nature it lacks nuance and focus. Impressive, yes. Entrancing, no.

Château Haut-Brion 2010, 15% (7.5/10. PJR, 5.11.2014) – engaging initially, with fairly expressive aromas of warm earth and sweet spiced fruit. But then the whole thing is overtaken by a wave of rasping alcohol that pinches the fruit and makes a solid wine into an overblown one. Shame.

Château Langoa-Barton 2010, 13% (7.5/10, PJR, 5.11.2014) – real power but also elegance here, something of a rare combination in this vintage. Exciting wine as a result. Engaging leafy creamy dark fruit aromas. Tannin is plentiful but fine. Latent spice, impressive but not OTT. A real success.

Château Montrose 2010, 14% (7.5/10, PJR, 5.11.2014) – a wine that speaks with a gravelly but booming voice. Fascinating. Big-boned but very grounded in its intense but ultra fine tannin, savoury flavour profile and structuring acidity. Exponential but within reason. Nice leafy/herbal edge to the flavours. Not my personal favourite but one to watch.

Château Cheval Blanc 2010, 14.5% (7/10, PJR, 5.11.2014) – ungainly aromas don’t make for an easy first impression. I admit I tend to find CB inscrutable in youth, and this is no exception. Decent texture, albeit slightly rustic, and a fine firm sinewy flavour profile, but it’s just too alcoholic and bitter on the finish to go down well.

Château Smith Haut Lafitte 2010, 14.5% (7/10, PJR, 5.11.2014) – decent tannin, acidity and touch of spice. Bit hollow and plummy, a touch too warming on the finish for my liking. Should develop nicely enough though, has enough structure and presence to hold itself.

Château Calon-Ségur 2010, 14% (6.5?/10, PJR, 5.11.2013) – this wine was highly rated in critical circles but it didn’t show brilliantly. Engaging aromas (warm earth, graphite, cassis) and plenty of tannic finesse but it seemed a bit hollow and lacking in easy-drinking grace.

Château Troplong-Mondot 2010, 16% (5.5/10, PJR, 5.11.2014) – yes, that’s right, 16%. That’s more like fortified wine. Inevitably, the wine is imbalanced. There’s plenty going on here – lots of baked fruit and creamy character, with firm fine tannins. Some people may like it. But it’s dumpy and lacking any sort of refreshment value. It’s not what Bordeaux is about. It’s not even what red wine is all about.

Château Climens 2010, 13.5% (7/10, PJR, 5.11.2014) – if the palate were as rich and beguiling as the aromas, this would be sumptuous stuff. Lovely perfume of intensely honeyed apricot. It’s definitely glossy and rich, but lacks that extra dimension of acidity and grip to be really great.