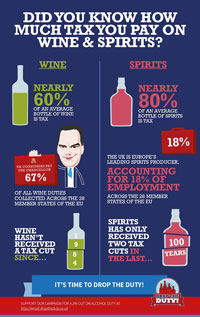 You win some; you lose some. And some end up as a messy draw. So it was with Budget 2015 for wine lovers.

I put my voice behind a well run campaign by the WSTA, among others, for the Chancellor to cut wine duty by 2%. (Here’s a tub-thumping piece I wrote for TotalPolitics, for example).

To put it briefly, I want to help keep Britain one of the best places in the world to enjoy wine. Not to mention support a great British success story in the booze trade and, now, our brilliant homegrown wines, vodkas, gins – the list goes on.

I’m afraid that continuing with a sky-high and counter-productive tax regime will end up in good producers heading to other markets, with an inevitably negative impact on choice and value on our shelves.

In the event, of course, George Osborne decided to cut tax on spirits, beer and cider by 2% and to freeze wine duty.

On one hand, it’s a decent result. As recently as two years ago, the alcohol duty escalator saw booze tax automatically hiked by 2% above the rate of inflation every year. (It shot up by over 50% from 2008-2014, accounting for over half the cost of an average priced bottle of wine and over 70% on spirits.) We campaigned, successfully, for an end to that last year, even if wine duty did increase at the same time.

So a freeze in wine duty is another step in the right direction this year.

But you still can’t help the feeling that wine has, once again, been left out in the cold. I’m told that parliamentarians favour beer, cider and whisky as they’re perceived as home-grown products, whereas wine is primarily an imported good. It also enables them to play to a sector of the electorate who still see the pub as the heart of British social life.

Which is to state the facts, but miss the point. Wine is a deeply ingrained part of the British culture. For centuries it has been a vital trade for Britain. Its import, distribution and sales employ thousands of people and is worth billions to our economy.

What’s more, nearly half of pub sales these days are wines and spirits, as pubs move away from the traditional beer-swilling mens’ clubs into more gastronomic, family-friendly environments.

According to the latest research, wine is now officially our favourite national tipple. Before the budget, nearly two thirds of Brits thought wine duty was already too high. It’s clearly unfair that Britain pays two thirds of the entire EU duty contribution.

With the election now just over a month away, the political destiny of Britain is impossible to predict. Seldom has there been such an open playing field or a more wary and divided electorate.

Whoever the next Chancellor is, I wish him or her the best: it’s not an easy job. But I do hope, especially after recent rash pledges not to raise VAT and national insurance, two key revenue raisers, that they don’t condemn Britain’s 30 million wine lovers to be losers in budgets of the future.

I for one would love to be toasting a progressive government’s vision rather than drowning my sorrows come next March.