In this country, we have an alcohol problem. That problem is the way in which we discuss and deal with alcohol.

Alcohol is a toxin. In excess, it kills. Used irresponsibly, it can cause society and individuals significant harm and cost. These facts are beyond doubt.

However, they are also just one side of a complex story whose realities are still far from being totally understood. They also focus on the negatives, while the positives can be harder to quantify (but no less valid for being so).

The positive side of alcohol is its ability to bring pleasure. Used responsibly, it can benefit rather than harm your health. It can have a profoundly civilising influence and acts as a social adhesive, bringing people together at a time when solitude has never been more widespread in society. The industry can also benefit people in terms of jobs and income.

This is a simple take on what is a very complex issue. The point is, that alcohol is nothing if not a divisive topic. Unfortunately, this means it can be used for political leverage or gain. A good example of the latter is the Chancellor’s annual tax grab on booze – duty has risen 50% on wine and spirits since 2008 and now an astonishing 79% of your average bottle of spirits and 57% of averagely priced wine is tax. And, every budget in March, this goes up.

It’s a neat political move. People tend to care more about the price of petrol than booze, so the Chancellor can make great play of tempering the former while quietly continuing the Labour government’s ‘alcohol escalator’ duty rises on the latter. It plays well to the health lobby, as price is one means via which consumption (and abuse) can be controlled. 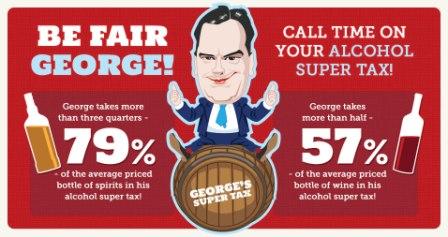 But it’s also very short-sighted. At a time when alcohol consumption in this country has been declining consistently on an annual basis, cross-border smuggling is on the rise (tax is 20% on wine in France) and the wine and spirit industry is worth an estimated £20 billion to the British economy and supports around 2 million jobs, hiking taxes merely penalises responsible drinkers and acts as a brake on an important part of our national economy.

The health lobby claims that alcohol costs the NHS £5 bn per year. Yet the alcohol industry pays some £17 bn annually in tax and wine and spirits are worth nearly £10 bn to pubs, bars and restaurants in sales around the country.

In the lead-up to the budget we can always expect both sides to start lobbing verbal grenades at each other. But one responsible way to make yourself heard is to join the Call Time on Duty campaign. It’s an informative website and one that allows you to send off an automatic letter to your MP. We’ve done it and it’s very simple.

Hopefully it will also act as a starting point for a sensible debate.