(by peter in Chile) 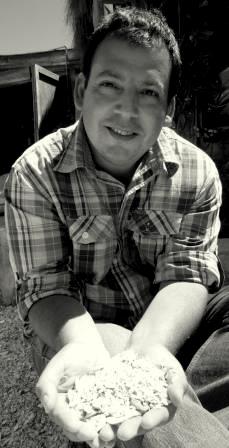 Jazz music’s loss was Chilean wine’s gain when Pedro Parra decided to ditch his dreams of becoming a professional saxophonist for agronomy.

For those unfamiliar with the name (increasingly few these days), Parra is a Chilean terroir specialist who trained in precision agriculture in France.

His route to wine was peripatetic – accidental almost – but in a short space of time he has helped change the course of Chilean fine wine forever.

Parra’s secret, if it can be described as such, is a combination of passionate advocacy, detailed knowledge and a dogged personality. That and a tendency to language of a decidedly earthy nature, together with a ready smile.

He has been instrumental in galvanising a new generation of Chilean winemakers to take risks, push boundaries and head into uncharted territory in the search for ever more refined, and ever more Chilean wines. He is now one of the key players in the Chilean wine industry, however much the traditionalists resent his sometimes abrasive approach.

All of which is why it was a privilege for us, the nine international judges here for the 9th Annual Wines of Chile Awards, to listen to Parra speak on the subject of Chilean terroir and present a selection of wines.

Both talk and tasting were eye-opening, with highlights too numerous to mention. But the exclusive unveiling of a new wine grown at 2,450m altitude in the heart of the Atacama Desert, one of the driest, most desolate places on earth, is worth singling out. Tasting notes on all wines follow below. 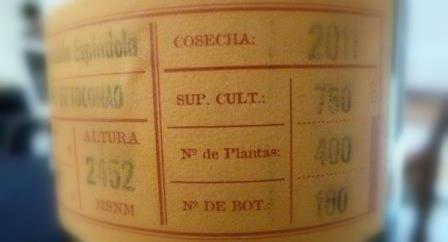 Parra talked at length about Chile’s naturally diverse geology, climate and terroirs. His general theme was the search for what might be termed the X-factor in Chile’s fine wines – call it minerality, savouriness, chalky tannins in reds – in other words, a somewhat elusive character notable by its absence in almost all of Chile’s big, bold, ambitious wines to date, but a key feature of many celebrated classics in the world of fine wine.

He warned against impatience, stressing that vine roots needed time to develop and imbue the fruit with an expression of terroir. He advocated the strategy of small-scale winemaking, with a detailed focus on geology, soil, climate and vine, as indispensable to crafting fine wines. 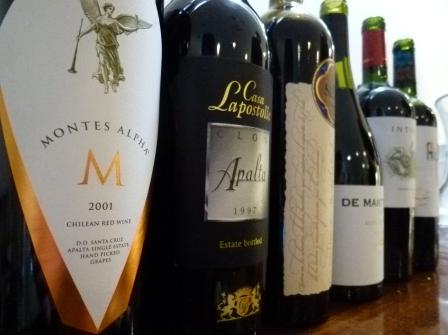 Parra also called for a change of mentality among Chile’s old guard, playfully advocating ‘a mental liposuction’ and championing risk-taking as a means to making wines of character and finesse.

The wines he chose to illustrate his talk were an eclectic selection; highlights are as below (tasted 8th Jan 2012).

Santa Helena Vernus Sauvignon Blanc 2011, Paredones (Colchagua), 12.9% – from the same vineyard as Casa Silva’s Cool Coast wine, this Sauvignon is notable in its restraint and minerality. The aromas are subdued but enticing, with notes of citrus, herbs and stone. A subtle edge of grilled green pepper, perhaps. But the beauty of this wine is its structure: tangy, bracing and direct, with a salty savoury lick on the finish. Maybe a bit raw, and could use a little more breadth to its zingy core, but this is impressive stuff, reminiscent of a Limarí style in its salty mineral tang. Vigorous and pure. 7/10

Clos des Fous Chardonnay 2010, Cachapoal, 13,8% (c. US$15) – one of Parra’s own projects, a partnership with four members including winemaker François Massoc, this was sourced mainly from Coya, at 900m altitude in the Andean Cachapoal Valley, with a further 35% from Requínoa and 15% from Traiguén in Malleco. No oak, no malolactic; left on the lees for 6 months; this is the first vintage. The idea ultimately is to have this as an entry-level blend while also releasing single-vineyard Chardonnays from Traiguén, Coya and Bío Bío Coast under this brand. In the meantime, this is a sensational wine, and brilliant value to boot. It’s different from almost all other Chilean Chardonnays from the moment you smell it, with its subtle earthy, salty savoury aromas. A complete absence of fruit, a fierce mineral charge, and thrilling acidity allied to textural elegance. Real nobility here, tension and class. Reminiscent of a very concentrated Chablis. Drinkable now, especially with food, but it would benefit from a couple of years in the cellar. A new dimension for Chilean Chardonnay in this unoaked style. Beautiful. 8-8.5/10

Maycas del Limarí Quebrada Seca Chardonnay 2010, Limarí, 14.1% (c. US$24) – fast becoming a benchmark wine in its context, Marcelo Papa’s top Chardonnay from Limarí was tasting predictably savoury, nutty and elegant. Roasted hazelnuts and glazed citrus, with a lovely charge of salty acidity on the finish. Great structure; handles its weight dextrously. Ageworthy, very good. As a quibble it could have more density at its core. But it’s a lovely wine. 7.5-8/10

Tabali Talinay Salala Vineyard Pinot Noir 2010, Limarí, 14% (£14) – respected Chilean wine expert Patricio Tapia described this as ‘the first real Pinot Noir from Chile, structurally speaking’. By which he meant that, traditionally, Chilean Pinot Noir has suffered from poor quality plant material, virus, ill-suited sites and soils, mis-managed winemaking and a host of other drawbacks. This limestone vineyard very close to the ocean is a new paradigm for Chilean Pinot – and it shows, mainly in the tannic texture, which is grippy and grounded, elegantly savoury. This wine strikes me as a work in progress, though – it is slightly over-oaked and could do with more core density and less alcohol. But in its basic architecture it looks very promising, especially once the vines have had time to develop and mature. 7/10 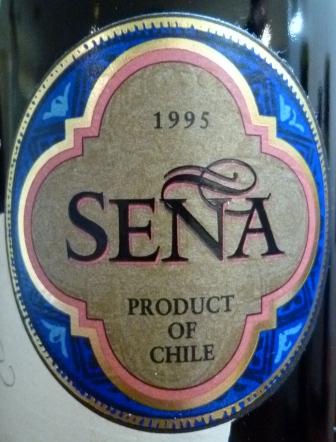 Morandé Edicion Limitada Carignan 2008, Loncomilla, (Maule) 15% (c US$22) – something of a love/hate wine, like many of its kind – but I loved it. Masses of sweet rich ripe fruit, inky and jammy, but also floral and ferruginous. It’s a joyous aroma, exuberant and rakish. The palate is juicy but with lovely tannin, smooth but savoury. Layered berry, cream, herbs and flowers. Graphite and black olive hints. Carries its alcohol well and the richness is offset by the chalky tannin and tangy acidity. Lovely stuff! Very true to type despite the American oak. Perhaps not the most elegant wine, but hard to resist its ample charms. 7.5-8/10

Montes Alpha M 2001, Colchagua, 14.2% (c. US$80) – a classic Chilean icon wine and Bordeaux blend (80% Cabernet Sauvignon, 10% Cabernet Franc, 5% Merlot, 5% Petit Verdot) from Apalta in Colchagua. The nose is lovely and mature, with dried fruit, tobacco and creamy hints. Elegant and noble. Palate starts well but tails off into slightly bitter, hot territory, which is a shame. Impressive but ultimately a little disappointing – it’s telling that Montes are planting more Mediterranean varieties, like Syrah and Mourvèdre, rather than Bordeaux ones in Apalta now. 7/10

Clos Apalta 1997, Colchagua, 13.8% (c. US$120) – a treat to be able to taste the very first vintage of this Chilean icon, on which Michel Rolland consults. But the result, after 14 years in bottle, was far from a vindication of the Frenchman’s trademark lush, soft style – it had largely fallen apart in bottle, showing flabby and baked. Some pleasant peppery, tobacco character but ultimately hot and rich. Over the hill, with curio interest only now. 5/10 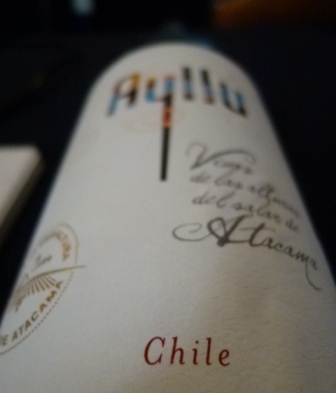 Seña 1995, Aconcagua, 13.5% – one of Chile’s very first icon wines, the fruit of what was then a groundbreaking association between Errázuriz and Mondavi of California. This was sourced from the various Errázuriz sites in Panquehue, mainly Cabernet Sauvignon with some Carmenère. Unlike the Clos Apalta, this had aged in graceful fashion, showing a somewhat desiccated, papery nose initially but opening out with aromas of baked herbs, tobacco and roasted pepper. Lovely structure, elegance and savoury finish. Shades of good classed growth claret. Look at the alcohol level! Drink up but a beautiful, historic Chilean wine – best wine of the day, one of my all-time favourites from this region, of which I’m not usually a massive fan. 8.5/10

Ayllu 2010, Salar de Atacama, 14.8% – a wine that deserves a bit of background (see below). As for how it tastes…aromas of earthy, baked berry fruit with chalky hints. Sun-dried flowers. Juicy, berried, quite vivid. Somewhat spirity. But on the palate is where it shows its potential – lovely chalky elegant grip, savoury in style. Lacks real structure and length but, given the circumstances in which it was made, this shows serious potential. The tannins are everything here; they ground the wine and offset the alcohol. In short, Parra’s initial excitement is thoroughly justified. 6/10

A wine from the Atacama Desert (some background)

Essentially a social aid project, some very small-scale, family-run vineyards have been planted over the last decade by the Chilean government and mining company Soquimich in the heart of the Atacama Desert. 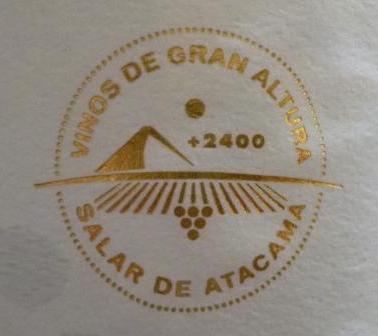 These vines – all 400 of them – belong to 72-year-old Juan Espindola Espindola, whose wife makes the wine (100 bottles in total) with ruthless simplicity: the grapes are picked not when in prime condition but when the family has time; the fermentation is fast and furious, to avoid any spoilage; the wine is bottled and sold swiftly. This is ground-zero winemaking and Parra jokingly adds that the most expensive thing about the wine is its label. UC Professor Alvaro Peña advised on the winemaking and bottling; Parra joined the loose project as of last year.

Despite its rusticity, however, the wine shows clear potential and authenticity. Toconao, where this wine comes from, has a high percentage of limestone in the soil (the houses are all built out of limestone bricks, like in France). Its altitude at 2,450m means that, while the light is intense, the days are rarely too hot, and the nights are cool.

More vineyards are now being planted – albeit still on a small, almost subsistence scale – but this should allow more searching conclusions to be reached. Vines have already been planted in San Pedro de Atacama and some (Pinot Noir) are planned at 3,500m in Talabre, which would make them some of the highest – if not the highest – vines in the world.

Once again, the frontiers of Chilean wine have shifted, with exciting results.