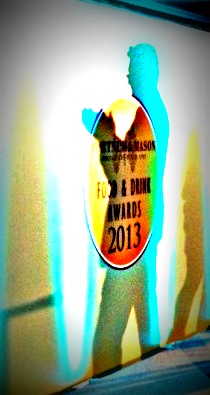 Recognising some of the brightest talent in food and drink was always going to mean lots of delicious fun, and so it proved at the inaugural Fortnum & Mason Food & Drink Awards.

I was privileged to be a judge, along with Angela Hartnett, Fiona Beckett, Tom Parker-Bowles, Xanthe Clay and Hamish Anderson. (Fortnum’s CEO Ewan Venters chaired proceedings.) Although we certainly had some tough decisions to make, and plenty of material to consider, it couldn’t really be called a hardship. A wealth of food & drink talent was at our fingertips to adjudicate. It almost called for a stiff drink…

On the night, the great and the good of the gastronomic world were out in force to celebrate a mixture of established names and exciting newcomers.

The latter aspect was particularly important for me. I was standing next to a magazine editor when the magnum opus that is Wine Grapes was announced as winner in the book category. ‘It’s a great book,’ he murmured, ‘but really – which average punter is going to read it?!’

At which point I told him to hold his horses, because the next award was for a newcomer in the same category, which went to the exciting talent that is Matt Walls for his engaging introductory volume, Drink Me!

Much the same point could be said about the Judges’ Award, which went to Jack Munroe, a young single mum from Southend who feeds herself and her young son on a shoestring and publishes her delicious recipes on a very popular blog.

She also gave the best acceptance speech, saying: ‘I thought I was invited because you felt sorry for me and wanted to feed me up on free blinis!’ (You can read her blog about the evening here.)

Many congratulations again to all the winners AND the short-listers. There was often very little separating the two so everyone nominated deserves great credit. Thanks also to Fortnum & Mason for making this whole thing happen and helping promote the cause of food & drink communication.

You can find a full list of all of winners & shortlists, as well as a natty little video of the evening, on the Fortnum & Mason page here. Special congratulations also to the drinks winners Jancis Robinson, Julia Harding & Jose Vouillamoz, Helen McGinn, Victoria Moore and Matt Walls.

Here’s to another vintage crop next year!