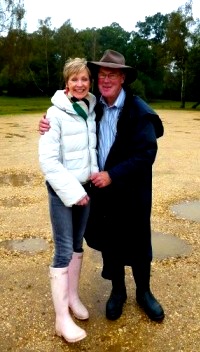 There’s just something irresistible about the word, isn’t there?

I certainly found it hard to resist when I received an invitation to forage for my lunch just down the road in the New Forest.

It’s such a trendy theme at the moment on the restaurant scene that it was too tempting not to find out a bit more about the realities of this skilful and somewhat forgotten art.

Our tutor was to be celebrity forager John Wright (of River Cottage fame) and we were also promised a fungus-fuelled cookery demonstration from Michelin-starred chef Alan Murchison followed by lunch at Gérard Basset’s Hotel TerraVina.

Out came the wellies from their summer hibernation.  In my excitement I managed to overlook the fact that I’ve never foraged in my life before and that if we were really expected to find sufficient food for lunch  (the whole idea behind the expedition)  we were likely to go hungry.

John, however, showed the confidence of a man, or rather mycologist, with 45 years experience. He set out his stall from the moment we met at Shave Wood Car Park just north of Lyndhurst, telling us he wanted to find at least 25 different species of mushroom before we headed back for lunch.  So off we all squelched in the drizzly rain, following John in his sweeping navy raincoat, floppy waterproof hat and wicker basket on each arm.

The first thing I learnt was that foraging requires practise. 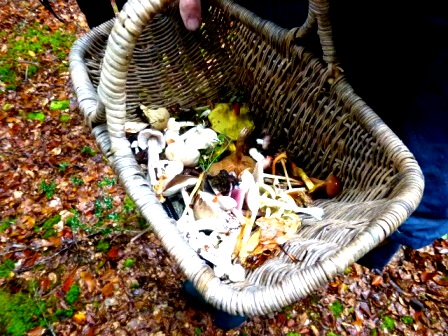 One or two of our party were chefs who forage regularly and their ability to spot a new species, however tiny, was incredible.  My family nickname has always been ‘eagle eye’ because I have an annoying habit of seeing everything, but I was rubbish compared to John and the foraging chefs.

A knowledge of trees helps.  At one point John said ‘I expect to find Chanterelles here’ – it was all to do with the towering beeches that surrounded us.

The second lesson of the morning was that most of what the New Forest has to offer is inedible, either that or my party was particularly good at sniffing out poisonous mushrooms.  From what I understand, the official name for these killer fungi is ‘toadstool’ as opposed to ‘mushroom’, a term reserved for the edible species.  Either way, basket one (aka: lunch) remained virtually empty, whilst basket two filled up with alarming speed.

Luckily John didn’t insist that his ‘25 species before lunch’ were edible and we soon found ourselves back in the warmth of Hotel TerraVina, enjoying a refreshing glass of Louis Jadot Mâcon-Villages 2011 only slightly later than originally planned.  The team at Louis Jadot had come up with the idea of foraging for lunch and, as our generous hosts, they provided all of the wines for the day.

Back in the kitchen, Alan Murchison had wisely anticipated our lack of success and a wonderful array of healthy, edible mushrooms awaited our return.  He politely picked through our ‘lunch basket’ and, with a wry smile, moved swiftly on to his demonstration. 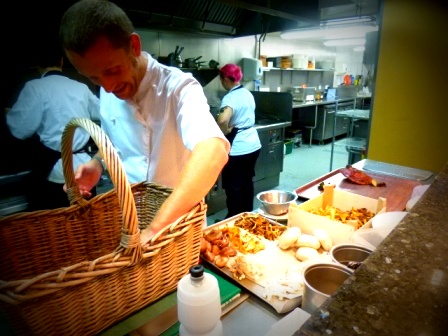 He kicked off his mushroom masterclass by explaining that mushrooms are very porous so it’s better to gently brush the dirt off rather than wash them.  He then whizzed effortlessly through a perfect mushroom soup, a ‘risotto’ made from fragola (apparently ideal for a supper party as it’s impossible to overcook) served with rare ribeye and wild mushroom fricasée,  and finally, sea bream with oriental mushroom broth.

Alan’s patter is as polished as his performance in the kitchen and he entertained us throughout with lines such as ‘serving a steak blue is old hat, it’s for people who wear beetroot coloured corduroys’, and ‘cooking is like making love, it’s all about experience and practise’.  Joking aside, he’s a very confident and engaging teacher and I felt I’d learnt loads in the space of just thirty minutes – I’ll certainly never dare shake my steak pan again.

As we sat down for lunch we passed a table laden with the fruits of our morning’s forage, which John had meticulously labelled with each of their Latin names.  Although it was an incredible display of extraordinary shapes and colours, the most exciting find of the day for John, a self-confessed nerd, was a tiny purple-hued mushroom that he didn’t recognise.  He’d covered it over with a teacup so that it didn’t dry out before he took it home to identify.  Now that’s what I call dedication.

Lunch was a feast for the eyes, the palate and the nose.  What follows are some thoughts and comments on the dishes and the wines that were matched to them.

As most of the wines are available in a variety of independent merchants I would suggest that for information on current pricing and availability you contact Hatch Mansfield, the agent for Jadot. 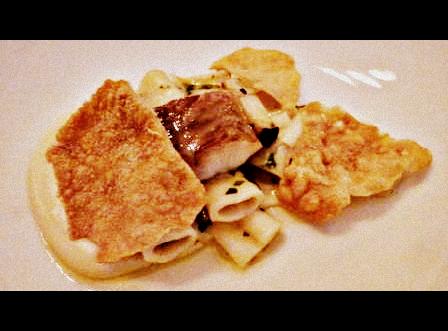 Without doubt my favourite dish of the day.  I’m a complete truffle addict and I also love Italian food so the smokiness of the eel and the truffle pasta with the earthiness of the ceps and Jerusalem artichoke was complete heaven for me.

The Fleurie is a new wine made from two hectares purchased in 2011and it was too young and firm to drink with such a comforting, autumnal dish.  The unoaked white Clos de Loyse from Romanèche offered fresh acidity and rounded fruit flavours that balanced all the different elements in the dish, and worked especially well with the fishiness of the eel.

The red Beaune was showing extremely well with classic red fruit and earthy aromas, backed up by a succulent, gamey palate.  The Marsannay was reticent on the nose but nutty, taut and focussed in the mouth with spicy white peach flavours and good length.  Both wines worked well with this dish but the red was slightly overwhelmed.  Although the dish was oriental, it was earthy rather than spicy and the lovely nutty flavour of the white was delicious with the broth and the pan-fried bass, not to mention the fried shallots that topped the dish. 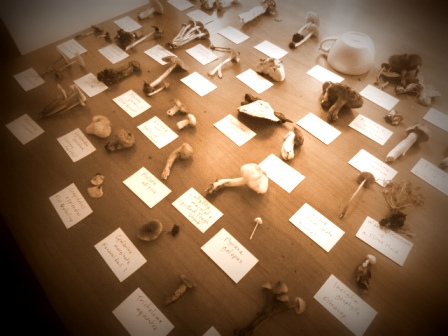 Three wines with this course and a ‘three in a row’ triumph for the day’s white wines.  The Chassagne was not only my favourite wine of the day, it was also the best match with this delicately flavoured, creamily textured dish.  It’s a wine with its own subtle creamy flavours, beautiful fresh acidity and long, nutty finish.  Incredibly fine and drinkable, and a superb match for the melt-in-the-mouth guinea fowl.  The Charmes is currently rich and dark, and opens up in the glass to give oily, masculine density with fine tannin and leathery, exotic flavours.  It’s still very muscular but has wonderful potential.  The Corton is more developed, as you would expect, with gamey flavours and  a smooth, silky texture that makes it very easy to enjoy right now but it was just a little too savoury for this particular dish.