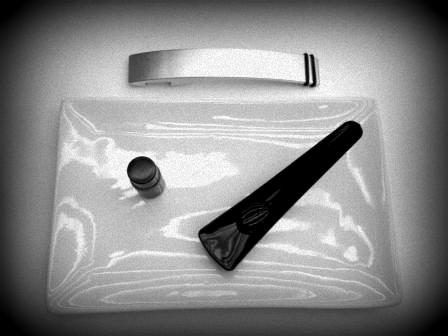 What do you think about wine and food matching?

Go on. What do you really think?

I’d hazard a guess that, for the vast majority of people, it’s nothing more than a pretentious fancy, an amusing tangent – a vague irritant at times when decisions are called for but nice enough when it works out.

Largely, though, it’s not much on people’s radar.

Which is why, amidst all the dry ice, Gewürztraminer and talk of molecular aromatic synergies at the 12-hour marathon that was the Wine & Culinary International Forum in Barcelona (sponsored by Spanish winery Torres), I occasionally felt we were losing our collective grip on gastro-reality.

As one panellist bravely pointed out: ‘At the end of the day, it’s just a meal.’

And yet there is much to say and learn about the fascinating and hitherto largely under-studied science of taste and flavour, and its practical application in kitchens and dining tables around the world. In short, it’s worth getting geeky if it means eating and drinking better. 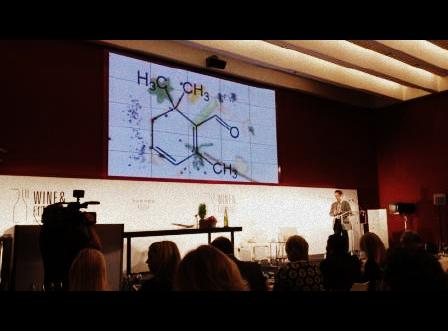 Take the energetic Canadian sommelier-turned-researcher and author François Chartier, who was elucidating his intriguing theory of aromatic synergy as the means to scientifically explain classic flavour pairings and a chance to invent and explore new ones.

According to Chartier, it’s all about identifying key aromatic molecules that define certain families of ingredients (and wines) and thus help in pairing them. Examples abounded.

Moving from theory to practice, we tried a pairing based around the pyrazine family. This aromatic grouping, Chartier explained, splits into two main groups – methoxyprazines (roughly, leafy, green pepper smells) and dimethyl pyrazines (produced by heating or toasting pyrazines).

After attempting to blow-torch a red pepper on stage for dramatic effect, Chartier served us a combination of beef tataki with a purée of charred red pepper and grilled sesame seed oil together with Torres’ Mas la Plana Cabernet Sauvignon 2003, aged in toasted oak barrels. Cabernet is a grape variety known for its naturally pyrazinic character, accentuated in this case by the toasty oak, and the flavour pairing was indeed spot on. As in the case with all the best pairings, each made the other taste better, resulting in a flavour experience that was greater than the sum of its parts. 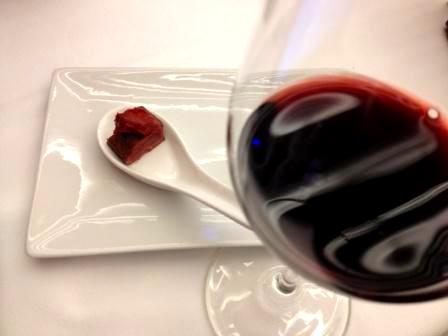 Chartier went on to suggest other innovative pairings based on his research – chocolate with asparagus, ants with cardamom and gin, huitlacoche tacos with curry and maple syrup – while touting phrases such as ‘gout sans frontières’ and ‘a new culinary era’.

This was to lapse into overstatement. While undoubtedly useful as a means to understand flavour pairings and suggest new ones, Chartier’s theories are little more than an enlightening explanation of culinary common sense: pair like with like. They also gloss over the intricacies of what is a complex science, something which another speaker, Master Sommelier Josep Roca of the three-Michelin-star El Celler de Can Roca, expertly touched on.

‘We can’t reduce what we do to mechanics,’ he stressed. ‘It’s not always the best pairing in theory that will give the best results. It’s about understanding people, respecting their needs and expectations.’ By way of illustration, Roca mentioned serving a wine from a special year if people are celebrating, using wine ‘cocktails’, or not interrupting intense conversations during a 14-course tasting menu (‘the wine can wait’). He also talked about cultural associations, traditions, pyschological stimuli, academic issues, temperature and other complicating factors.

This, together with some impressively detailed insights into wine and food matching – for example, serving pudding wine warmer than normal if paired with ice cream, to prevent taste buds being de-sensitised, or serving a great wine well before the food comes (‘because, for a wine like that, time stops’) – made for an impressively holistic and realistic perspective. Not to mention a fine advert for his restaurant. 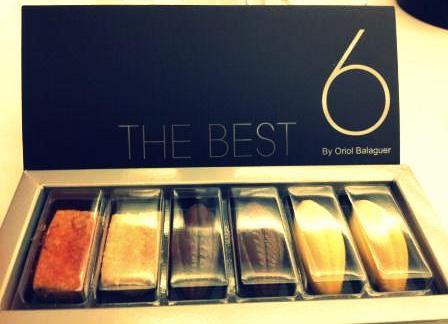 If, for Roca, wine and food pairing is defined by its complexity, for El Bulli sommelier Ferran Centelles and champion pastry chef Oriol Balaguer, it’s all about keeping things simple (stupid).

The pair gamely attempted to demonstrate their theory in practice. They served three pairs of morsels, each pair matched with one wine. Within each pair there was a ‘simple’ version and a ‘complex’ version – the idea being that the wine and food pairing worked much better when things were kept simple rather than over-complicated.

By and large, the theory worked. Audience members were given coloured cards with which to vote and overall the room tended to be split roughly two-thirds in favour of the simple match. For example, with Marimar Torres’ Don Miguel Chardonnay, the simple parmesan biscuit was a far more harmonious pairing than the version that added oregano and tomato paste. Similarly the chocolate with only 40% cocoa with mint and mandarin was an easier pairing than the chocolate that also had mint, chilli, and more cocoa and sugar – even if the Cordillera Brut was too dry for both. (This latter had a light-hearted aspect to it because the chocolates also contained popping candy, which was great fun with the fizz.)

It was instructive that Centelles, whose alma mater El Bulli specialises in cuisine of the most complicated kind, should be advocating simplicity in cuisine in the quest for wine and food harmony. I’d chatted to him the evening before and we’d agreed that it’s often the simplest, most un-prepossessing wine styles that work best with food. Perhaps we’ll be seeing an accent on simplicity at the new El Bulli academy. 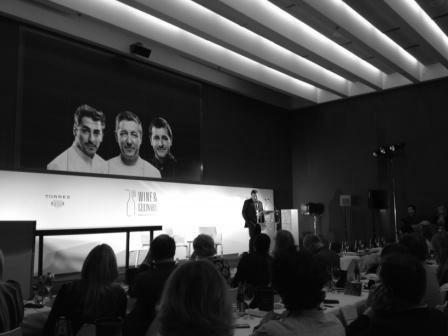 The prosaic but important issue of price was brought up by Jancis Robinson in a round-table discussion with Victor de la Serna and her husband and food critic Nick Lander.

‘Consumers are weary of the extent to which wine is expected to bankroll restaurants,’ she stated. ‘It might work at the very top of restaurants, where budget is less of an issue. But people are counting the pennies more and more, there is less expense-accounts dining and people can easily check retail prices with smart phones.’

Robinson added that, when Lander ran L’Escargot restaurant, she would help compile the list but he would price it, something that resulted in ‘continuous arguments’. She also mentioned that their son was entering the restaurant trade and planned to launch a venture that made a virtue out of pricing wine fairly.

The question then becomes: if wine doesn’t subsidise the food and many other costs of a restaurant (wages and rent being key ones), where are the profits generated? More expensive food? Cover charges? One hopes that sheer volume of business attracted by the fair pricing policy would help. I know we’d like to support such a venture.

Many other interesting topics were raised and examined in the course of the day. For example, why don’t restaurants invest as much time and effort in pairing non-wine, even non-alcoholic drinks, with their tasting menus as they do with wine? (While the real motive may be margin-related, Will Holland at La Becasse in Ludlow swiftly tweeted that they offer ‘fruit blends’ to go with their tasting menu – kudos.) Also the brow-furrowing question of whether a ‘perfect’ wine match could ever exist (‘it does; the problem is it’s not unique,’ opined Centelles gnomically). 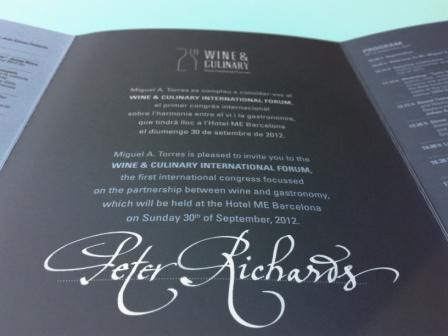 Beyond the gastronomic brainstorming, though, we find it helps to keep your feet on the ground.

We deal with wine and food most days. It’s our job. We try to learn as much as we can but then keep things simple and helpful rather than proscriptive or pretentious. The great thing about working together is that everything is a dialogue, as wine (and its pairing with food) should always be.

Most importantly, we try – as much as married Masters of Wine can – to treat wine like just another ingredient on the table. Albeit one that can make the difference between a pleasurable and transcendent experience.

Or, if you prefer the plain version, from a nice meal to a great one.

Wines to watch food by

Torres Waltraud Riesling 2011 – sadly unavailable in the UK, but if you get the chance to try it (eg in Spain) then do. It’s elegantly scented and crisp yet well balanced. Very moreish with its appley, creamy flavours. Apparently when Miguel A Torres married his German wife Waltraud, it was on the condition that he planted the Germanic Riesling variety in Catalonia. These are thus some of the oldest Riesling vines in the country. Enjoy it as an aperitif, perhaps even with pork scratchings. 6/10 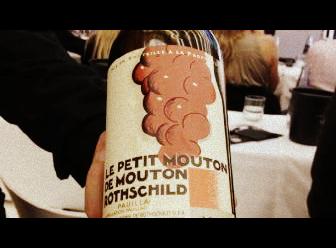 Pol Roger Brut Vintage 2002 – a tasting of Primum Familiae Vini wines followed the seminar, from which the next three recommendations come. This beautifully stylish wine is still a baby but it has notes of coffee, wood smoke and baked apple. Very persistent and layered, but needs at least five years in the cellar yet. Long, cogent, delicious. (8/10)

Petit Mouton 2005, Ch Mouton Rothschild – the second wine of this famous Pauillac property makes for delightful drinking in this excellent vintage. A blend of 60% Cabernet Sauvignon and 20% each of Cabernet Franc and Merlot, it shows toasty, cedary and fresh blackcurrant aromas. Scented and inviting, with a savoury meaty undertone. Elegant fine tannin, good concentration and textural elegance. It’s open and engaging, more rewarding (for example) than the various Carruades de Lafite I tried recently. Very impressive. 7.5-8/10