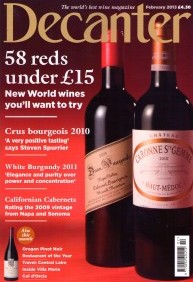 For those who missed it, here’s a pdf of my recommendations piece in Decanter magazine on Chilean reds under £15:

This was part of a cover story entitled ’58 New World reds under £15′, from the February issue.

Snap them up, because they won’t be around (or this cheap) for ever…