The topic of natural wine is as trendy as it is contentious – so it was gratifying to be given the chance to review two of the hottest book releases on the subject for The World of Fine Wine magazine.

For those not clued up about natural wine, it’s essentially a winemaking philosophy which advocates minimal intervention, eschewing the latest technological winemaking aides (such as cultured yeasts, new oak, sulfur dioxide, enzymes and myriad other options available to the modern winemaker) in favour of a more ‘natural’ expression of wine.

It’s difficult to come up with a more precise definition than this because the natural wine movement isn’t a movement as such. It’s more an anti-movement – a reaction to what are perceived to be the powerful standardising forces in wine today, by a somewhat disparate array of wine producers.

It’s true to say that many of them are to be found in France – the Loire, Beaujolais and Rhone particularly – but there’s no overt doctrine, no mission statement, not even a name that can be agreed upon for this nonetheless compelling phenomenon. Everyone seems to have their own take on what’s important and what’s not (with plenty of heat under the collar generated if said views are challenged).

If you were cynical, you might dwell on the fact that the hotbeds of natural wine production are those very same areas, such as Beaujolais, which are in dire need of some positive PR after a disastrous few decades in the doldrums of the wine world.

On the other hand, many natural wine producers are simply doing what their predecessors have for generations, not to mention injecting some much-needed vitality, intrigue and polemic into the wine world. While some of the wines are downright disgusting riffs on an unholy cider/vinegar/farmyard conflagration, others are utterly delicious and positively life-affirming.

Just as with conventional wine, natural wine has good and bad examples. The one thing that’s rare to find, though, is blandness. And thank heavens for that.

All of which leads neatly back to the books under review, which are: Authentic Wine by Jamie Goode and Sam Harrop MW (UC Press, £20.95) and Naked Wine by Alice Feiring (Da Capo, £15.99).

You can read my lead review in WoFW (in pdf format) by clicking on the following link: Peter’s review in The World of Fine Wine, Dec 2011 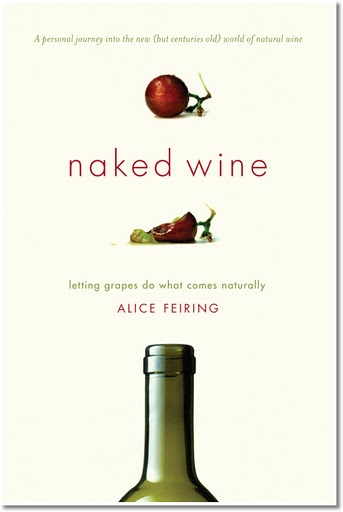 In essence, my conclusion is that both books are fascinating reads and come highly recommended. Taken together, they make a wonderfully complementary take on this highly topical issue.

Personally, I found Naked Wine to be the more rewarding and cogent read, while Authentic Wine is better at posing deliciously contentious questions than answering them (to my mind its conclusions often come across as fudged or watered-down, perhaps a function of the dual authorship, though maybe also a reflection of what are complex and involved issues). It’s also important to note that Authentic Wine isn’t just about the subject of natural wine, instead touching on a number of subjects including terroir, marketing, carbon footprint, faults and biodynamics.

To make more explicit an important point which I allude to in the review, for what it’s worth I found both Feiring and Goode’s previous books (The Battle for Wine and Love, and The Science of Wine respectively) to be more fulfilling in their own right than these publications.

By way of footnotes, I see that Alice has already commented on this review (click here to see her take on what she describes as an ‘elegant’ piece). My thanks to The World of Fine Wine and its publishers for kindly allowing me to reproduce the piece here. Finally, a picture credit – to De Long Wine for the cover shots of the books together.