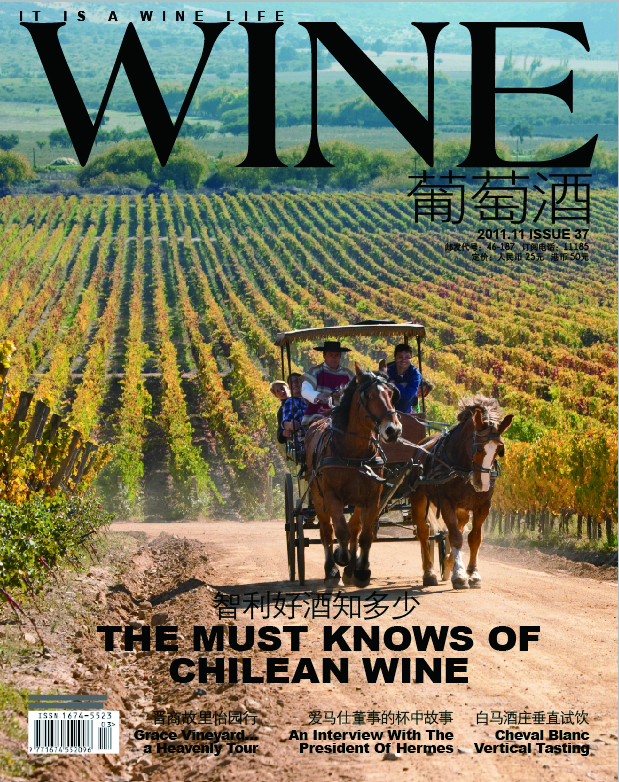 I was recently asked to provide a perspective on Chile for Wine magazine of Guangzhou in China, part of the GuangDong Times Media Co.

Editor Jessica Zhao kindly sent me over some images of the feature as it appears in the magazine, which accompany this piece.

For those who don’t read the language particularly well, I thought I’d reprint (below) my responses to her questions (which came in a series of emails, so some later questions are responses to my previous answers).

1、Why did you travel in Chile and wrote the book The Wines of Chile?

I went to Chile by accident. I’d studied Spanish and had lived briefly in Spain and Peru; I was looking for an adventure somewhere new. I was nearly decided on Mexico when out of the blue I got a job in Chile as a journalist. After a while learning the ropes as a staff writer, I worked my way up to become editor of the operation. At this time, my boss noticed I was spending a lot of time visiting the country’s wineries in my spare time. (I knew very little about wine other than the fact I liked drinking it!) He saw the potential and asked me to write a tourist’s guide to visiting Chilean wineries. I couldn’t believe my luck. I accepted on the spot and set off to travel round Chile’s wine country. It took me over six months; I visited over 100 wineries, with many adventures along the way. The winemakers were all very kind and took me in, gave me tastings, taught me about wine. That was my wine education – my ticket into the world of wine. I haven’t looked back. Since I moved back to the UK, I’ve been a regular visitor to Chilean wine country.

2、What are the characteristics of Chile wine industry?

One of the key features of the Chilean wine industry is the astounding speed at which it is constantly evolving. People forget that the modern Chilean wine era only really began in the mid-1990s. That’s less than two decades to build a world-class wine industry – quite a feat. And the change continues at a breathtaking pace. New regions, producers, grape varieties and wines are constantly emerging. It’s an exciting time.

Diversity is the other key characteristic of Chilean wine. The country’s crazy geography and varied climate means it has a natural diversity to its wines. Previously, when it was mainly the Central Valley that was cultivated, this wasn’t evident in the wines. But it’s fast becoming the case as the vines spread into new, more marginal areas which are yielding altogether more intriguing wines.

If you’re being critical, you could say that the industry has a tendency to play things safe, to be business-minded rather than stubbornly wine-focused. The Chilean character tends to be conservative and eager to please. But this is changing. There is now a burgeoning set of winemakers whose principal ambition is to make the best wine they can, to reflect their site and their variety, and not pander to the market.

3、What do you think of Chile wine? And which wines do you like best?

I think Chilean wine is a work in progress. It has lots to offer to lots of people – be they wine novices eager to understand this magical liquid, or connoisseurs looking for great value alternatives to the classics.

My favourite wines are the Sauvignon Blancs and Syrahs from cooler climates, like Elqui and San Antonio. I love what the Chileans are doing with Sauvignon Gris. I think Pinot Noir has huge potential, which will start to be realised in the next decade. Chardonnay from Limarí is also hugely exciting.

4、Why Chile has so many foreign investments?

Actually, Chile hasn’t got nearly as much corporate foreign investment as, say, Argentina. The big companies tend to be nationally owned or run. But of course Chile has its fair share of foreign investment – it’s an attractive place to invest. Stable economically and politically, with lots of growth potential in its wine industry.

5、If you will select the top 20 wineries in Chile, what are they?

Tough one! I could choose so many more than 20…

But if I have to choose 20 of the most exciting names for me at the moment, they’d include:

6、What about the future of the Chile wine industry?

Given the breathless pace at which the Chilean wine industry is currently evolving, it’s difficult to predict the future.

Also, and more importantly, as experience grows among Chile’s winemakers, both of their lands and global wines, the wines will have more finesse and elegance.

There’s also a movement starting towards organic/biodynamic/natural wines, which is good to see. If anywhere can do these styles well, it’s Chile.

7、  Why Chile can build a world-class wine industry in a short time?

This was demonstrated recently when the earthquake threatened supplies – but the country just re-doubled its efforts and got through it admirably. Plus, don’t forget that Chilean wine has been around longer than people think – since the mid-16th century – so it’s not as if it’s an industry in its infancy. But it’s true to say that the speed of evolution in Chile’s modern wine era has been astounding. And it’s not stopped yet!

8  What are your views on the important wine regions and grape varieties in Chile? What about the Carmenere? 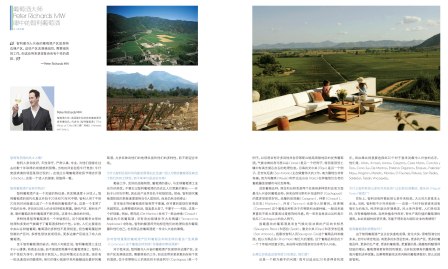 For me, the most exciting regions in Chile are those pushing into the margins, the challenging viticultural territories that need hard work but which are giving ever more complex, characterful wines. Alto Cachapaol is one example, high in the Andes. There will be many others from altitude in the Andes that will produce excellent wines. Cool westerly Limarí is another case in point, especially on those sites with high limestone content in the soil. Coastal Elqui is another example, San Antonio is doing great work, the deep south is very interesting too. As is Maule and Itata for their old-vine Carignan, Malbec etc.

Re grape varieties, Syrah and Sauvignon Blanc are the two demonstrating the most exciting potential in terms of diversity and quality. But Chardonnay from Limarí and Alto Cachapoal can be great. Old-vine Carignan, Cinsault, Malbec, Tannat can also be amazing. Carmenere depends on where it’s grown and by whom; in general I prefer styles that aren’t too massive or over-worked. There are some lovely examples from central Maipo and Colchagua.

9、In your opinion, which wines reflect their site and their variety, and not pander to the market?

This kind of wine has not traditionally been common on Chile. But, gratifyingly, it’s becoming more and more common now. There are too many to mention by name – a good sign. But it’s interesting to see, for example, De Martino releasing a Cinsault made as a ‘natural wine’ with no sulfur and aged in clay amphorae. Winemakers in Chile are starting to believe in their sites, their vines – and themselves. The results are there to taste – and are very exciting.

10、We want to know more about why Ch Lafite, Casa Lapostolle, Miguel Torres and so on invest in Chile?