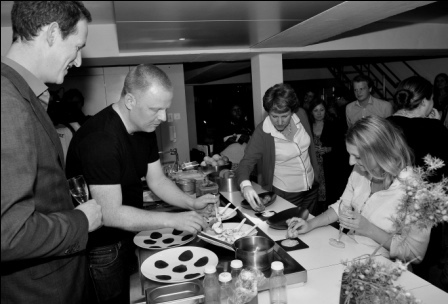 My job was not only to entertain on the evening but, in the first instance, to choose some delicious wines to go with the food on show.

Not a problem, I thought. Until I saw the menu.

– Razor clam and wild horseradish with sea herbs and buttermilk?

Duly fascinated, I not only recommended the best wines available to me (top-notch Martinborough Sauvignon and Rioja Reserva, among other things) but I also made a beeline for Chris and his cooking.

I wasn’t disappointed on either front.

Hruskova is a thoroughly genuine, down-to-earth character, modest in demeanour and passionate about all things gastronomic (including wine – all too rare in a chef).

His utter lack of bravado and artifice is especially noticeable given he was recently awarded a Michelin star for his Farringdon restaurant North Road. This reflects well both on him, and his food.

This restaurant takes a thoroughly Scandinavian approach to its grub – pickled, smoked, earth-scented ingredients are notable features, Aquavit even featuring on the plate – but with a unique twist.

All ingredients (within reason) are locally sourced, seasonal British produce. The restaurant employs foragers to gather ingredients like sea herbs. The elegantly proportioned wine list features Sussex fizz Nyetimber 2005 by the glass (£15) and plenty of natural, organic and biodynamic options.

All very much in tune with the times. Susie and I thought it our duty to pop along and check it out at first hand. 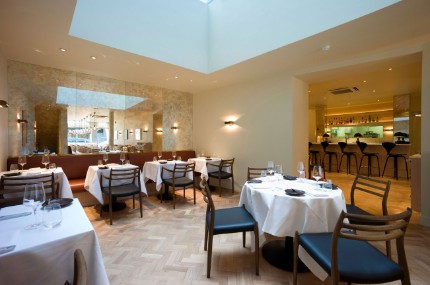 The decor is sleek and elegant – Susie immediately coveted the chairs – and we sat down to a glass of the rich, apricot-scented Nyetimber.

There promptly appeared something very simple – bread and butter – but which offered an insight into what was to come.

The bread was rye and spelt – warm, served in an earth-toned hemp cloth. The ‘brown butter’ was a taste sensation – having been heated to 170 degrees, cooled and whipped, it was nothing short of a flavour explosion, just like fudge but savoury. Perhaps not to everyone’s taste: startling and utterly moreish for this reason.

Some playful and delicious amuse-bouches followed including fried balls of dock and pearl barley with nettle mayo and a unique take on pork scratchings (they have to be seen, and tasted, to be believed).

Our starters were (we tried three, what can I say):

Mains featured Cornish monkfish and wild mushrooms, lovage and coastal herbs as well as the house’s signature dish (which I couldn’t resist): the venison loin rolled in burnt hay with beetroot textures. 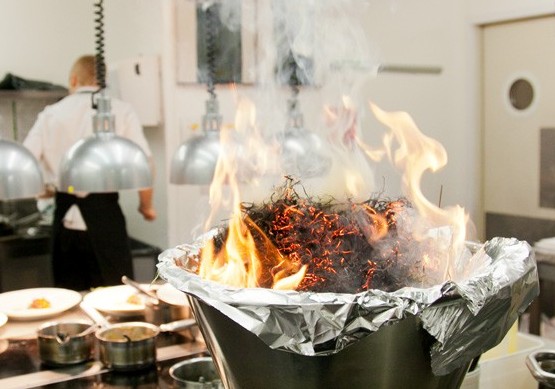 And the words to describe these dishes?

Challenging. Sometimes unsettling – as if plucked daintily from the entrails of the earth itself. Utterly original (to our palates, at least). Ultimately inspiring.

It’s very rare even in a city as cosmopolitan and diverse as London that a restaurant really blows your socks off with a unique brand of inventive, exigent, barnstorming dishes like this.

At some points I felt like I’d been strapped to a rough table in a smoke-ridden Viking hut and forced to recite all 3182 lines of Beowulf. This is food that takes you on an adventure; that demands your engagement as much as it excites your taste buds; and which ultimately leaves you sated in the most visceral of ways.

Though we haven’t visited it ourselves, we understand it’s not a million miles away from what acclaimed chef René Redzepi and his team are doing at Noma (you can read the review from our site by Claire & Wally here). But here is a treasure trove on St John’s Lane, EC1, which is sensational in its own right. So if you don’t fancy the trip to Copenhagen…

Desserts featured caramel, liquorice with malt and pear with pine and birch ice creams. These sweet delights were matched quite brilliantly (and originally) with the Grandjo late harvest 2007 sweet wine from Portugal.

The other wine we savoured on the evening was a very fine bottle of the Thierry Puzelat Touraine Pinot Noir 2009 (reasonably priced at £43). A ‘natural’ wine, its edgy, vibrant, shifting flavours sat well in the company of this food. Susie described it, brilliantly, as tasting ‘like it had just been ladelled, thick and heady, from the steaming vat into the glass’.