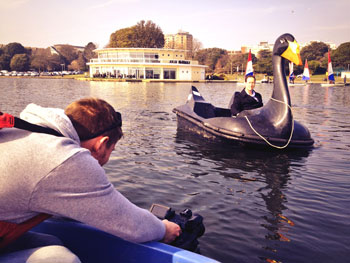 Sunny Poole was our destination for this week’s Saturday Kitchen wine shoot. Somewhat inevitably, a pedalo was involved… But it all turned out very well, not least because James was impressed with my work, describing one of the wines as: ‘absolutely fantastic, one of the best we’ve had!’

Peter’s comments: not perhaps the most obvious pairing but the mealy, buttery tones meld really well with the oats and potatoes. Plus, this is a wine that delivers a fair old bang for your buck so, while it doesn’t overwhelm the cod, it can stand up to those tasty bacon morsels. ‘Love it, love it, love it’ was Paul’s considered verdict (and he’s a man who knows his wines).

Peter’s comments: there’s something about southern Rhône Grenache that pairs really well with pork – that soft, succulent, sausagey character, perhaps. This is a great value little number from Asda, pretty crisp actually, but which cuts through the pork really well and lets that aromatic marinade shine. 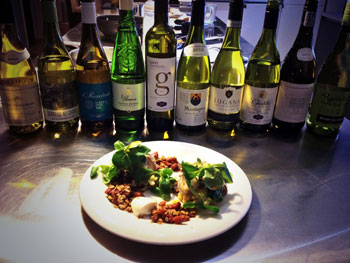 Food heaven and hell recipes by James Martin for studio guest Bradley Walsh, together with my wine matches, were as follows:

Thanks to James, Paul, Nigel and Bradley – also to the fine upstanding Cactus TV crew for another great show. You can find the show’s recipes on the BBC Food site and the wine clips are below. Thanks for watching and popping in here too; enjoy the wines!