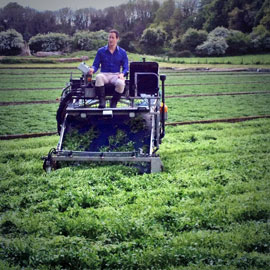 We filmed under glorious Hampshire skies this week to tie in with the Watercress Festival. They even let me loose on a watercress harvester! This after telling me the last person to use it was a certain James Martin, who crashed it after the cameras stopped rolling…

Your secret is safe with us, James.

Wine for asparagus with grapefruit vinaigrette by Daniel Galmiche

Peter’s comments: a beautiful take on asparagus, with the punchy grapefruit and gently spicy mustard all coming together beautifully. Really elegant. Sauvignon Blanc is the obvious choice – we tried others, but nothing worked as well as the classic. Susie was a fan of some New World examples but the best married exuberance with subtlety, as in the case of this good value Touraine Sauvignon.

Peter’s comments: this perennially good value wine from Puglia in southern Italy is also very food friendly. It’s currently on offer at £5.99 and a steal at the price. Sabrina’s dish has loads of flavour, from the lamb keftas to the smoked aubergine, tomato and garlic mix to the cucumber and dill yoghurt. This wine is supple and succulent enough to work well on all fronts. That said, the flavours also work well with rich whites (Greco), gutsy rosé and fuller reds like the Tsantalic Organic Greek Cabernet Sauvignon (£8.99, Waitrose).

Henry Winkler (best known as The Fonz in US sitcom Happy Days) was the studio guest. His heaven and hell dishes, cooked by James Martin, are as follows together with my wine matches: 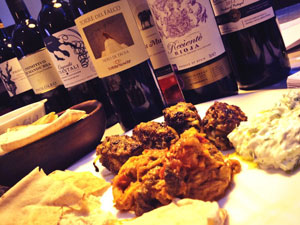 Thank you to the brilliant Cactus TV gang and of course James, Daniel, Sabrina and Henry. Thanks to everyone at Vitacress, the Mid-Hants Railway/Watercress Line, Waitrose and Sainsbury’s for their warm welcomes. And congratulations to all the organisers and exhibitors at the Watercress Festival 2014, which proved to be another glorious occasion.

You can catch the whole show via iplayer until 24.5.14. Recipes can be food on the BBC Food site. Wine VT clips are as below. Unfortunately there were syncing issues with the audio during broadcast, which is why my lips weren’t quite in time with my words. Sorry about that. But it’s not, as some cheeky soul suggested via twitter, because I’d had too much to drink!