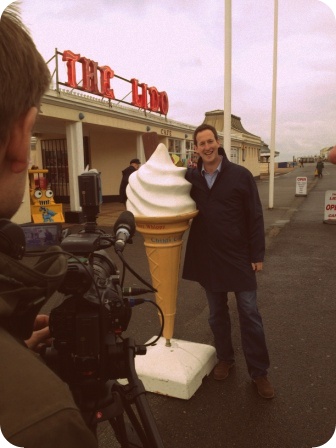 ‘One of the best wine combinations we’ve had since the show started,’ was host James Martin’s reactions to one of my wine choices this week.

Needless to say, this made me very proud. Thanks, James! (Although I must admit I did have a little bit of help from Susie as ever, not least with cooking the dish to try wines alongside beforehand… So credit where it’s due!)

It was blustery and fairly drab weather the wine shoot in Worthing, but we more than made up for it – partly by running off with an oversize ice cream (see photos) but mainly with the aid of some brilliant wines to partner with delicious dishes by Aggi Sverrisson (Texture/28-50) and Henry Harris (Racine).

You could tell how much I was enjoying my work – studio guest Amanda Byram said that my reaction to the wine was like that scene from When Harry Met Sally. Enough said…

Aggi was cooking roasted scallops with wasabi sauce, fregola and sea vegetables – just the kind of clean, invigorating, original cooking that’s made him such a celebrated name on the London restaurant scene.

I matched this with the beautiful M&S PX 2010 (£6.99, Marks & Spencer) – a quite stupendous drop, a brilliantly original alternative to Pinot Grigio, and a lovely story too.

Aggi liked it, describing it as, ‘Good: nice, fresh, clean – works well with the nice fresh clean scallops.’ James said it was, ‘something different, fantastic’ while Henry, clearly an educated man on the wine front, noted how its ‘lovely yeasty aromatics balances against all those savoury elements [of the dish].’ 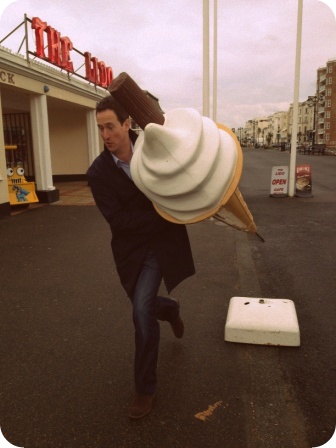 Henry’s poulet sauté au vinaigre was a triumph. To wash this down I went for the Paul Mas Vermentino 2011 (from £6.49, Majestic), a cheeky little white that really comes into its own with herby, gutsy food like this.

‘Fantastic,’ said Henry. ‘It’s very aromatic, just balances up against things with a little acidity or lots of herbs, great with fish too.’

James, meanwhile, said, ‘I have to say that this is one of the best wines we’ve had combination-wise since the show started. Absolutely delicious and an absolute bargain. Won’t be much of that left by the end of today in the shops – delicious.’

Other recipes on the show included James’ sesame salmon with tempura salmon and yuzu mayonnaise and poached and fried pork belly with pickled cauliflower. You can find all the recipes from the show on this link.

You can see all of the wine action on the clips below.

Thanks again to James, Aggi, Henry and Amanda for a great show – and also to all the fine folk at Cactus who work so hard week-in week-out to put on such a fine production. Thanks also to Jake for the photos.