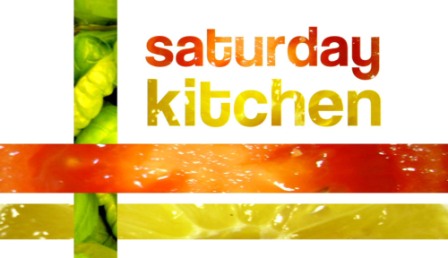 Haggis and moss are ingredients that seldom venture into our wine matching radar, which is why this week’s Saturday Kitchen proved a particularly challenging and exciting task.

I was in snow-covered Horsham, following some extremely wintery weather – and I don’t think I’ve ever felt so in need of a glass of wine to warm my heart and my numbed extremities!

First up this week was one of Scotland’s best-loved chefs, the delightful Nick Nairn.  Given it was Burns Night on Friday, Nick created a sumptuous dish of ‘Crispy Haggis & Potato Pancake with Fried Egg, Spinach Salad and Warm Whisky & Bacon Dressing’.

Peter and I tried it out at home and it was absolutely delicious, a Scottish take on brunch that we both loved.  We found that full reds with not too much sweetness and a hint of savoury pepper character worked best.

The best match came in the form of the dark and peppery Finest Crozes Hermitage 2009 (£7.99 down from £9.99 until 19th February, Tesco).  Nick knows his wines and he clearly appreciated the way the dish and the wine worked together, saying, ‘I think it’s fantastic: I love the savouriness in it, and the spicy notes pick up the spicy notes in the haggis’.

He admitted, however, he’d also be happy with a drop of his local Glengorm whisky as an alternative. You can take the man out of Scotland…

It was a Saturday Kitchen first for this week’s second chef, Magnus Nilsson.  The whole team was very excited that the man behind one of the most talked-about (not to mention remote) restaurants in the world was heading into studio.  Fäviken is situated more than 600 km north of Stockholm, on a remote hunting estate in Jämtland, and it has just 12 covers.

Magnus relies entirely on local ingredients and even brought his own butter and moss with him for his dish: ‘porridge’ with chive oil, dried chives, pickled turnip, beef broth (poured through the aforementioned moss) and puffed grains.  I did actually (James Martin please take note!) attempt to cook an approximation of this dish and it was rather good – though I’m not sure it tasted exactly the same as Magnus’s…

Magnus is a former sommelier so the pressure was on to get this wine choice right. My first thought was that a hoppy Pilsner or IPA might be the answer here, but after trying several beers, lagers and white wines, and working within our usual budget and range restraints, I finally opted for a refreshing Italian white, the Librandi Asylia Melissa Greco Bianco from Calabria (Waitrose £8.99).

Although there’s a lot going on in Magnus’s dish, the flavours are actually very gentle and easily overwhelmed, which is why this subtle, minerally white worked so well.  Although restrained, it has a lovely, ripe peachy feel that offset the salty butter and the savoury broth perfectly.  Magnus agreed: ‘It has a little hint of sweetness behind the fruit so it works really well with the salty dairy-ness of the porridge.’

As I sat back and watched the show this week I couldn’t help but think it really is testament to the incredible team at Cactus & Saturday Kitchen and all their hard work that they have built such a popular show – one that can attract long-established chefs such as Nick Nairn along with the newest generation of cutting-edge guys like Magnus.

You can find all the recipes from the show here on the BBC Food website.  These also include James Martin’s roasted shoulder of pork with apple sauce, cabbage and mash; mussels marinère; and roasted spatchcock chicken with a burrata and slow-roasted tomato salad.