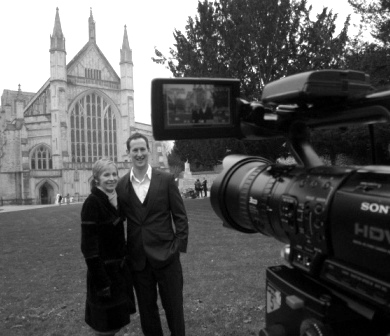 We’ve been so busy on the Saturday Kitchen front lately that it’s been difficult to keep up. But we’re slowly getting there and, as part of the catch-up endeavour for the site, here’s our show from New Year’s Eve 2011.

This was a very special one for us.

Saturday Kitchen is almost part of our family fabric now – they’ve announced both our kid’s births live on the show – and, after more than half a decade of Susie and I appearing as wine experts on the show, finally we got to film an episode together.

What’s more, it was in our home town of Winchester and we were allowed to splash a bit more cash on the wines than the usual £9 price ceiling.

All of which made for a great shoot. James Tanner was cooking sea bream with ginger, citrus and chilli, while Nic Watt was knocking up a roast leg of lamb with salmoriglio sauce and almond croquettes

(You can find all the show’s recipes here on the BBC Food site – plus several others from James Martin including waffles with hollandaise, poached eggs and bacon, coffee and chestnut meringue cake and turmeric-spiced prawns with omelette pilau.)

Both of the wines went down well in studio. For James’ sea bream we chose the Thornbury Riesling 2008 (£10.99, Tesco), while Nic Watt’s lamb was put up against the Viña Eguia Rioja Gran Reserva 2001 (which was on offer at the time at £9.74, Sainsburys).

Here are the clips from the show. Many thanks again to all the fine people at Cactus TV and BBC1 – not only for kindly allowing us to reproduce these clips on our site but also for having us on the show. We love it!

First up, finding a wine for James’ sea bream:

And now the hunt is on for Nic’s lamb: