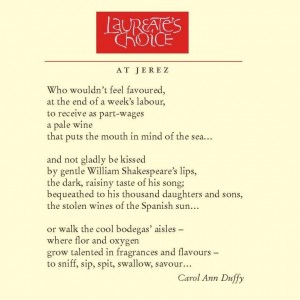 Was there ever a better incentive to write great poetry?

Poet laureate Carol Ann Duffy was recently in Jerez to pick up an entitlement of her post – the gift of ‘a butt of sherry’. That’s 720 bottles for those unfamiliar with your common or garden sherry bota.

It provided the opportunity for a very pleasing confluence of literature and fine wine, as Duffy issued a poem entitled ‘At Jerez’, which contains the following, memorable evocation of sherry:

It’s by no means the first instance of sherry in fine literature – think Falstaff et al – but it’s almost certainly the latest. And very fine words they are too. 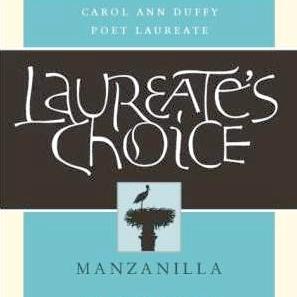 The custom of the crown gifting the poet laureate a butt of sherry began in 1619 (Ben Jonson) but was discontinued from 1790 until 1986, when it was revived by the Sherry Shippers of Spain for Ted Hughes.

Carol Ann Dufy is the 22nd poet laureate and the first woman to hold the title. Her latest collection is The Bees, at the launch of which she served guests with her ‘Laureate’s Choice’ sherries, chosen by her and bottled and labelled especially for her.

Apparently her tastes are for Manzanilla and Fino. Because these styles are best drunk as fresh as possible after bottling, apparently Duffy will receive a certain amount delivered fresh each year for the rest of her tenure.