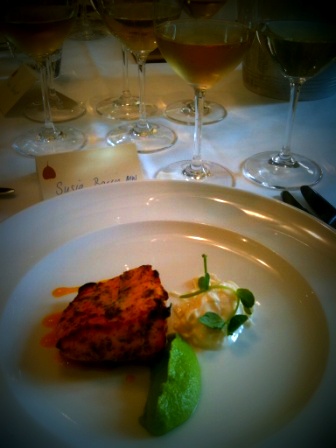 The autumn tasting season is now in full swing and, as ever, there are one or two events that are a total pleasure to attend.

A recent lunch, hosted by The Sherry Institute of Spain at the Cinnamon Club, was exactly that. The idea was simple: to match a range of sherries to various Indian dishes, with two similar styles of wine offered with each of five courses.

The success of the lunch depended, more than ever on this occasion given the intense flavour of both sherry and Indian cuisine, on the quality of the wine and the dishes presented to us.  Neither disappointed and it was one of the most interesting and delicious wine and food pairing lunches I have attended.

Here’s a quick run-down of the dishes and accompanying wines, with my thoughts and conclusions:

This was a plate of two halves, with the crab offering sweet & fruity, fresh fishy succulence, while the soup was all autumnal spice and aromatic warmth.

Although there was general agreement at my end of the table that the manzanilla wasn’t quite as vibrant and fresh as it might be, its light, salty tang offset the crab beautifully.  The fuller, more concentrated and structured fino (the better wine of the two) was more suited to the earthy spice of the lentil soup.

At least that’s what I thought.  Not everyone was in agreement, my neighbour at the table preferred them the other way around while our host, Beltrán Domecq considered the Fino the best match for both elements of the dish.

He went on to add that ‘fino sherries have an incredible capacity for going with vinaigrette dressings’.  It’s apparently something to do with the fact that the volatile acidity in fino sherry is extremely low.

This was a stunning dish. The smokiness of the tandoori salmon combined perfectly with the nose-tingling green pea relish and the creamy shallot raita that also accompanied it.  The relish is made from garlic, green chilli, mustard oil and salt and, we were told by manager Hari Nagaraj as he introduced the dish, it adds a wasabi-like kick.  A drizzle of mango puree gave a final touch of fruity sweetness to the dish.

The Fino Inocente was an out-and-out winner with this one.  Lifted, fresh, smooth and almondy, it coped beautifully with every element of the dish, never overwhelming but offering the most delightful and vibrant partnership.

The smokiness of this dish, which emanated from both the tender chunks of charred guinea fowl and the smoked paprika, was a fantastic match with this style of sherry.

What was surprising was that the better wine was not the best match.  The Palo Cortado is an amazingly intense, orange and hazelnut-infused liquid with a spicy finish and incredible length.  The Amontillado is good in a dry, nutty, tangy way, but not nearly as impressive.  When it came to putting the dish and the wine together, however, the Palo Cortado was too powerful, while the Amontillado improved with the dish, becoming more rounded and orangey.

There was a lot going on in this dish and it needed just the right wine to cope with all its different elements.  As well as the irony, gamey flavour of the deer, we had fennel, cumin, black onion, mustard and cardamom seeds in the pickling spice, a couple of rich and aromatic vegetable side dishes, as well as some flatbread and pilau rice.

Again the most impressive wine was not the most harmonious match.  As Beltrán Domecq rightly stated, the long-aged Palo Cortado is a vino da meditazione, which, with its incredible concentration and touch of luscious sweetness, was crying out for a plate of salty blue cheese and a roaring log fire.  The Oloroso is less complex but worked better with the food, providing just the right weight of nutty, raisined flavour without overwhelming the dish. 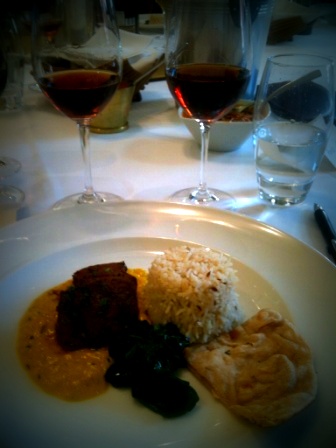 Of course by this point it was pure greed to eat anything more, but anyone who can refuse a warm pecan pudding with a mound of creamy PX parfait has a great deal more willpower than me.

Both of these sweet wines worked well with the dish.  The Dry Sack was perfectly good; richly sweet with raisin and prune flavours.  The Solera 1847, however, was fabulous – full of intense hazelnut aromas and so much luscious flavour.  I simply wrote ‘wow’ as I sat back and enjoyed every last mouthful.

1)      Drink Fino and Manzanilla as quickly as possible and only keep it in the fridge for up to one week after opening.

3)      If you are introducing sherry to a new drinker (he used his grandson as an example!) start them off with a medium or cream sherry

The Cinnamon Club and Cinnamon Kitchen

In early July, Peter and I spent a hugely enjoyable and fascinating day judging What Food What Wine India (a new sub-section that has been added to the competition this year) at the Cinnamon Club’s sister restaurant, Cinnamon Kitchen.

The food here is equally impressive and we urge you, the next time you are deliberating where to book a table in London, to try one of these temples to fine Indian cuisine.