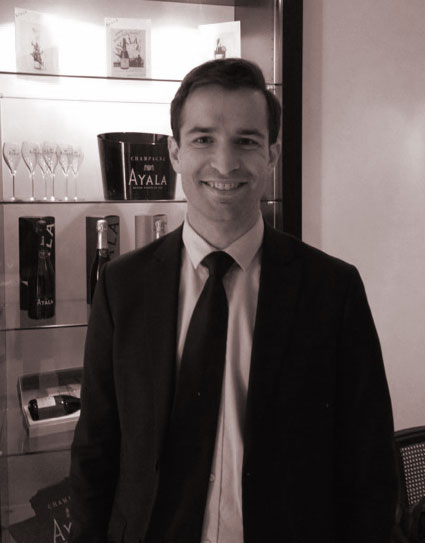 The Aÿ-based Champagne house of Ayala has gone through quite a transformation since I last visited in 2009.

Back then the modestly sized house, which had been bought by Bollinger in 2005, was under the directorship of Hervé Augustin, known in the wine trade for his colourful bow ties as well as his passion for zero dosage wines (champagne without the customary sugar added at bottling).

Ayala had no formal tasting room at the time and I remember sitting in someone’s office to taste through a range of nine wines, including three non-dosé cuvées, all made by chef de cave Nicolas Klym.

Today, it’s fair to say that almost everything is different.

From personnel to label design, things have changed and the first very noticeable difference comes in the form of a pristine new reception area and tasting facility. Once the humble residence of Ayala’s housekeeper, the building at Ayala’s entrance gate has been transformed into a haven of sleek black and white elegance, achingly stylish and with the distinct Art Deco feel of the early 20th century, something of a golden age in the history of the house.

There has also been a significant change to the Ayala livery. Gone are the white labels with a splash of red that strongly reflected the link with Bollinger, to be replaced by a striking black label for the non vintage Brut Majeur and a slate grey/silver one for the Brut Nature. Whether they are to your taste or not, both the reception facility and the new labels are individual, eye-catching, and they give a strong visual identity to the brand.

In terms of people on the ground, with Augustin and Klym now retired there is a new and ambitious young team at the helm. Director General Hadrien Mouflard arrived from Bollinger in 2012 and is still in his mid 30s while chef de cave Caroline Latrive is not yet 40. This trend extends to several of the rest of the 13-strong team and the energy this combined youth brings to the house is evident to see. 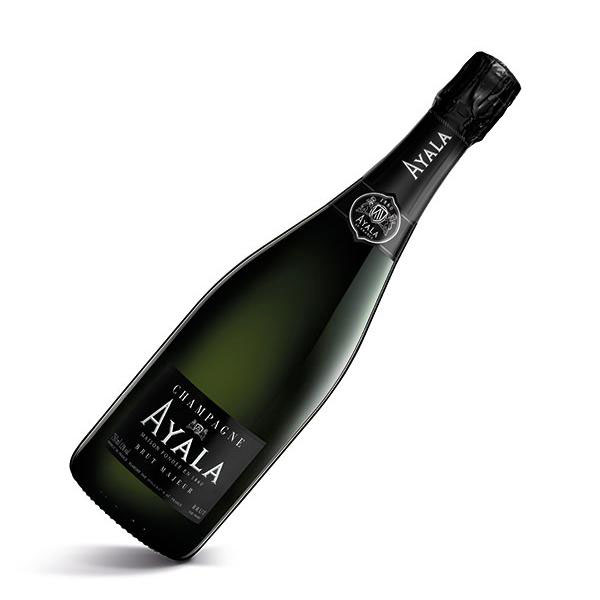 There have been notable changes in direction for the wines too. The range has been almost halved to just five core wines and a move away from the former focus on zero dosage – only one wine is now non-dosé.

So Ayala has a new team, a new look, a more consolidated range of wines and a glamorous space in which to taste them.

What it still lacks, however, is a clear identity of wine style. It was a brave decision to move away from zero dosage which was obviously not working well enough as the house’s main calling card.

Latrive is keen to focus her efforts on producing excellent Chardonnay wines and the blanc de blancs is clearly the wine that the house is most excited about promoting. Based on the quality of the youthful 2007, as well as the older vintages I tasted, this is a wise move.

The basic non-vintage Brut Majeur, however, is a good but not great wine and it needs work if it’s going to attract serious critical acclaim and live up to the promise its new packaging suggests.

Given Ayala is keen to properly differentiate itself from Bollinger and to focus on Chardonnay, it would be interesting to see what effect pushing the current 40% of Chardonnay in the Brut Majeur up a notch or two might have.

There is no doubt that Ayala is on the right track and it is fortunate enough to have a team of engaging, passionate people steering it along. It will be intriguing to see how the next few years play out for this rejuvenated house.

Ayala Brut Nature (7/10, SB, 5.1.2015), £32 Oddbins (TBC) and Independents – Vibrant lemon and mineral nose, almost salty. Palate is super crisp and fresh and very tangy – good length with a mineral feel and a distinctly savoury, salty finish. A really invigorating wine with an attractive finish. (NOTES: The same blend as Brut Majeur but with an extra year on the lees.)

Cuvée Perle d’Ayala 2005 (8-8.5/10, SB, 5&6.1.2015), £90 Independents – Only 6,000 bottles of Ayala’s prestige wine were made in 2005 but it’s delicious and well worth seeking out. Creamy, exotic, honeyed and bready on the nose. Lovely on the palate, really spicy and exotic yet fresh and clean, vibrant and beautifully balanced. The touch of Pinot Noir lends inviting vinosity in the mouth, which is also dry and elegant with impressive depth of flavour and great length. (NOTES: Disgorged May 2014. Dosage 6g/l. 40% Chardonnay (Chouilly), 40% Chardonnay (Mesnil), 20% Pinot Noir (Aÿ)) 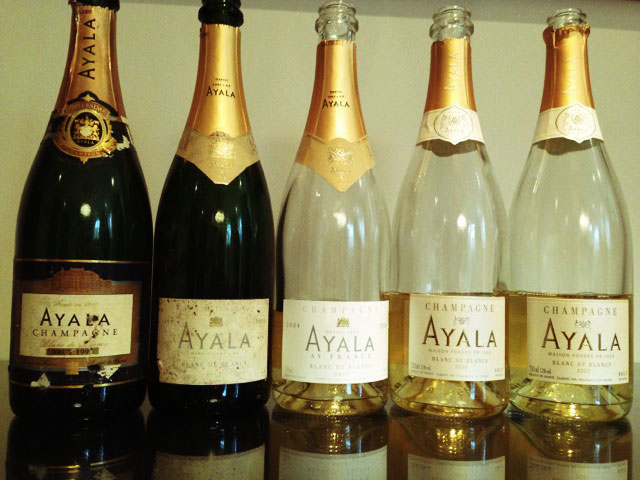 Ayala Blanc de Blancs 1992 (8.5-9/10, SB, 6.1.2015) – Mid-straw with very fine bubbles. Mushroom and a touch of truffle on the nose, a salty mineral note too and some clotted cream aromas. The palate has very fine but still fresh and lively fizz. It is savoury, salty, intense and really compelling. Some lovely forest floor and truffle notes develop in the glass. A terrific wine from a difficult vintage. (NOTES: Disgorged in 1998. Dosage 8-9g/l. (1/3 Mesnil, 1/3 Chouilly, 1/3 Cramant))

Ayala Blanc de Blancs 2004 (7.5-8/10, SB, 6.1.2015) – The first impression is spicy with some lightly exotic, tropical notes. Lovely mineral character too that mingles with the spice. The finish is intense and dry, also a little tropical, and with a balance that is lacking on the 1999. A wine that in it’s own quiet way leaves you wanting more. It is still developing and is one to watch. (NOTES: Disgorged March 2011. Dosage 6-7g/l. (Avize, Chouilly, Cramant))

Ayala Blanc de Blancs 2005 (7-7.5/10, SB, 6.1.2015) – Creamy, bready, autolytic nose – really quite developed for its age – rich and rounded. Tasting good now in a rich, bready, toasty, rounded and savoury way but the fresh acidity isn’t there in the way it is in the 04 and by contrast this isn’t a wine to keep – drink it now (with wild mushroom risotto…) and enjoy its immediate pleasure. (NOTES: Disgorged June 2014. Dosage 6g/l. (Avize, Chouilly, Mesnil))

Perle d’Ayala Nature 2002 (8.5-9/10, SB, 6.1.2015) – Nose is intensely bready and very toasted, it’s also a much more deeply coloured wine than the 2005. The palate is incredibly nutty and dry and salty. It’s a serious and really impressive wine, very much more developed than the 2005 and with wonderful length. (NOTES: Disgorged May 2012. Chardonnay (Mesnil, Chouilly, Cramant) Pinot Noir (Verzy))