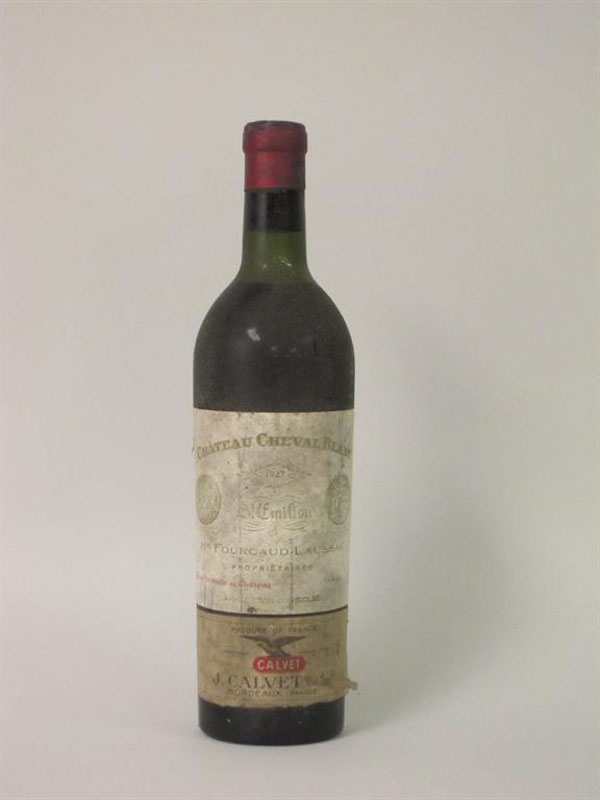 So a single bottle of Cheval Blanc 1947 sold for £3,000 yesterday at Brightwells auctioneers.

Is this silly and reprehensible or just an example of the inevitable economics of fine wine?

Would most people know the difference between this and a bottle of ordinary plonk? Would they even like it?

Finally, what’s the most expensive bottle of wine I’ve drunk?

These were the questions put to me by the mellifluous Mark Forrest on BBC Radio last night (mid-way through a port and chocolate tasting that I was doing with Susie at the time – something I was guiltily reflecting on as Mark discussed the ethics of selling energy drinks to kids on his show).

My general point was that silly money does get spent on wine. On the one hand, that’s fine – everyone has hobbies and passions, and if you’ve made your money fair and square then you should be allowed to indulge your passions. After all, people spend silly money on season tickets or splashes of paint on canvas or four wheels held together by various bits of metal. Why not wine? Especially one that was bottled when – in the case of the 1947 – the Cold War began, Pakistan was born and the Diary of Anne Frank was published. Or, for the 1863, the year the London Underground was opened, Abe Lincoln signed the Emancipation Proclamation during the American Civil War, and the rules of football were codified by the newly formed FA.

On the other hand, it’s a shame to see wine becoming just another dusty collective or traded commodity rather than a beverage to be enjoyed with friends and a nice meal. The rise of Bordeaux as an investment vehicle over the last few decades has priced many wine lovers out of the market – a potential crisis over which the bordelais are currently ruminating after a run of poor vintages.

And no, I wouldn’t recommend that if your daily tipple is a pint of best, or a glass of Pinot Grigio or Blossom Hill White Zin, that you tuck into some Cheval Blanc 1947. Such wines are inevitably an acquired taste – that’s if they’ve survived intact, having been stored properly, and are indeed authentic (always something to bear in mind when these fine and rare wines come up for sale).

Wine is personal. You need to stick to what makes you happy. If you want to splash out and try something new, ask someone like a local wine merchant after first explaining what you like and how much you’re prepared to spend.

Wine isn’t rocket science. It’s a nice drink that’s supposed to make you happy. And that needn’t cost the earth.

(PS and thanks Mark for kindly plugging Wine Festival Winchester – both on the show and its Facebook page – where you can put this theory to the test!)