This is the landscape of God and grapes, punctuated by cypress stands and infused with a profound sense of the medieval. However hard the work, you feel, there are worse places to be a monk, or a winemaker. Or a wine-loving tourist, for that matter, as we were for a few days perusing wine country in the hills of Montalcino and the seaside in Bolgheri.

And yet, for all its local charm and fine wine, it’s hard to come away from Tuscany without a sneaking feeling of unrealized potential.

How so? It’s partly down to the age-old Italian issue of fierce parochialism. Some, including chefs, tout this as a virtue – and local pride can have its benefits, including helping craft characterful local wines. But it also stops people working together to agree on common interest and promote themselves properly, both domestically and abroad. Contrast this with joined up promotional programmes by entire New World nations, like New Zealand, and you have a serious handicap.

Add to this an appellation system of such byzantine complexity that it instills fear even in experts (we’ll unashamedly hold our hands up at this point) and you can see why people struggle to get started on, let alone get their heads around Italian wine. What’s more, this profusion of baffling terminology is in the process of getting more rather than less complicated: witness the recent introduction of Chianti’s ‘Gran Selezione’ to an already cumbersome nomenclature. Gran confusione, more like.

Let’s not forget the rumbling of occasional scandals, too. Brunellogate in 2008 saw local producers accused of adding other grape varieties to what should be a wine made purely from Sangiovese. Among experts, it’s almost as if there’s a tacit acceptance that some sort of ‘creative’ blending is taken for granted, be it to bolster the oceans of Pinot Grigio exports, or to beef up the sometimes weedy wines from the north with gutsier brews from the warmer south. Granted, it’s perhaps not nearly as widespread as it used to be, but creative chaos is part and parcel of Italian wine, the shrug goes. Yet this does little to engender consumer confidence in international markets so crowded that little nuances like these can make a big difference.

Importantly, this is not a reflection on the wines themselves. On our brief stay we encountered rewarding, distinctive wines from the likes of Conti Costanti, Biondi-Santi, Ca’Marcanda, Bellavista, Sesti, Poggio di Soto, Plan dell’Orino, Tassi, Ornellaia, Col d’Orcia, Guado al Tasso, Hofstetter and Sassicaia. A few highlights are noted below.

Sure, consistency can be an issue. Vintage variation can be notable. And sometimes the wines aren’t super user-friendly or the easiest to understand, especially when young. But getting a feel for these committed producers making characterful, historic wine in such an inspiring landscape makes you yearn to see more of them in the UK, to strip away the complexity of the names, the denominations and the politics, and just to be able to appreciate the simple, sometimes inspirational pleasures that these wines can bring.

Sassicaia 2011, 13.5% (8-8.5/10, SPB, 15.10.2014) – a brilliant example of how complex, elegantly rendered red wine can be wonderfully balanced and poised, and yet be so full of future promise too. This is a baby, but still beautifully smooth to the touch. Fine-boned, layered and savoury. Hints of earthy tobacco and bay; the fruit is still quite primary. We’ve encountered some consistency issues with Sassicaia in blind tastings of late but this is very correct, a beautiful Cabernet/Merlot blend. Perhaps not a great vintage, but very good. 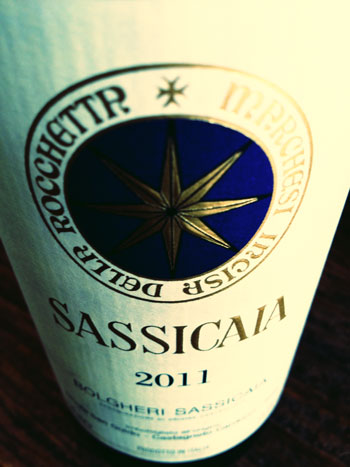 Poggio di Sotto Brunello di Montalcino 2009, 14% (8/10, PJR, 14.10.2014) – evocative scent of dried roses and warm earth. There’s some sun-baked fruit here, perhaps the result of a warm vintage, but there’s also a very lively energy and acidity here too. Complex but not at all excessive. Perhaps not one to keep as long as other vintages but this is seriously winning stuff. Savoury, silky, spicy. Intense but precise and inviting.

Sesti Rosso di Montalcino 2012, 14% (7/10, PJR, 13.10.2014) – pretty complete for a Rosso and one that carries its alcohol very well. There’s a linear backbone here that will even benefit from a bit more time in bottle. Sinewy, with hints of caramel and an earthy, almost ferruginous character add to the intrigue. Accomplished.

Biondi-Santi Rosso di Montalcino 2010 (6.5-7/10, PJR, 12.10.2014) – from what we tasted of the 2010 vintage, it’s looking very good (the Brunellos are set to be released in February). This is a really approachable, juicy red with the classical stylings that you’d expect of this historic producer.