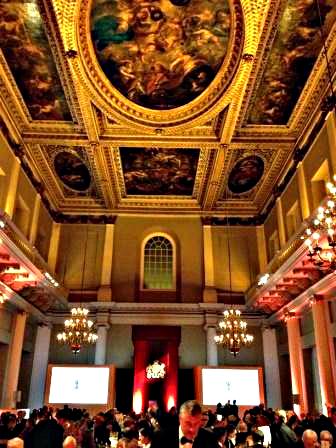 The Institute of Masters of Wine is celebrating its 60th anniversary this week and we went along to a sumptuous dinner at the Banqueting House in Whitehall (where Charles I lost his head in 1649).

Never before have so many Masters of Wine been assembled in one place – quite a scary concept, I’ll admit, and no doubt many would have run screaming from the place had they mistakenly wandered in.

It’s a stunning venue with its dramatic roof frescoes (some of which, appropriately enough, feature scenes of Bacchanalia) and throne.

The wines served were suitably extravagant, including:

The Loimer was impressively structured and complex, with some elegant maturity. The Meursault was buttery and rich, as you’d expect of a 2006, but with enough juicy acidity to keep it all in balance. 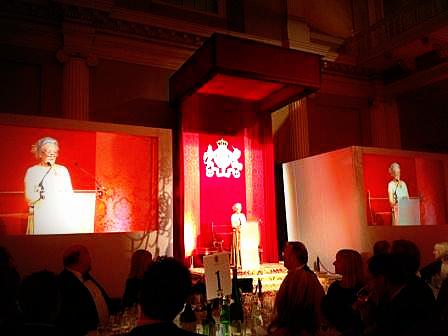 The Margaux was probably our wine of the night. Despite not being a top drawer vintage, the wine was so young and with lots more to give: scented, resonant and deftly assembled, it was smooth but savoury and intense, with that magical combination of levity and gravity that defines this superlative wine. It was decidedly graceful and easy in its skin: pure class, waiting to unfurl but accessible now.

The Ridge came a very close second. Complex, dense, structured and sinewy, with tons of tobacco and warm earth complexity. It was just as satisfying as the Margaux but was perhaps trying a bit harder. The Pichon Baron was notably green and a touch angular – typically of the vintage – and was a notch below the previous two wines. The Gewurz, meanwhile, was a stunner: succulent, spicy and exponential in style.

IMW membership now spans 24 countries and, although 60% are still UK-based, there are now over 100 Masters of Wine based abroad. Just under a third are women and the dinner was notable for a show-stealing speech by the very first lady Master, Sarah Morphew Stephen, who recalled how useful the qualification had been to breaking down gender barriers (even if it did lead to hackneyed jokes about being a ‘mistress’ of wine…)