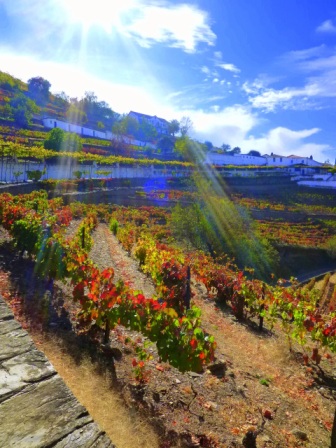 Back in late October, Susie and I were lucky enough to spend a weekend at one of the Douro’s most celebrated estates – Quinta do Noval.

The trip was actually a prize Susie had won for her Master of Wine dissertation (on brut nature champagne) – so the trip was in a similar vein to our California jaunt earlier in the year.

Between us, we’ve been lucky enough to visit Portugal and the Douro a few times now, but this was a special trip – short but focused, our first time at Noval, and with the emphasis on enjoyment and relaxation as much as noses to the grindstone. Which is just how proper wine should be appreciated…

The quinta at Noval is famous for its hospitality and setting – and rightly so. Set on the brow of a hill overlooking the river, the house enjoys panoramic views over vertiginous vineyards and iconic whitewashed stone walls.

On the front terrace there’s a 200-year-old Lebanese cedar tree. Much here speaks of isolation and self-sufficiency, from the hand-made terrace walls to the granite lagares for grape treading, from the old electricity plant to the cabbage patch and the bustling collection of ducks and geese.

(Apparently we just missed the last pig – sent to slaughter not long before. But the due dispatch is not without its creature comforts; Christian Seely, managing director of AXA Millésimes, owner of Noval, dryly explains that the pigs get a bottle of vintage port on their last morning, ‘on the basis that that is what I would like on mine. Usually it is an old slightly off vintage, but they have never complained, and indeed are most enthusiastic about it.’)

By way of background, AXA is a French insurance giant with a taste for the finer things in life, having assembled a notable portfolio of wine estates including Château Pichon-Baron in Bordeaux, Château Suduiraut in Sauternes, Domaine de l’Arlot in Burgundy and Disznókő in Tokaji. 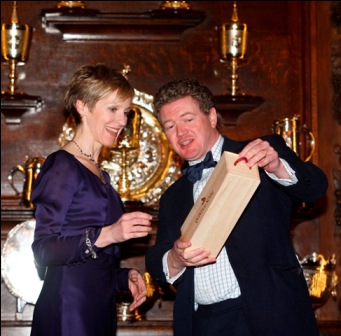 When AXA Millésimes, as its wine division is known, acquired Noval in 1993 it installed Seely as managing director. Though he later became MD of the entire AXA Millésimes operation in 2000, Noval clearly retains a special place in Seely’s affections, as does the significance of the energetic policy of renovation that has been pursued both in the vineyard and in the winery and estate infrastructure.

But time moves slowly in the Douro, and history can be both a blessing and a curse.

It’s true to say that, over the years, Noval has acquired a heady reputation – especially for its Nacional wine, a vintage port made from a small plot of old, ungrafted vines (albeit quite an unassuming vineyard, to our eye). The 1963 Nacional is legendary, a now very rare and very valuable wine, one of the oft-cited landmarks of 20th century wine.

Our frank impression was of an estate still in a state of transition.

Take the ports (see tasting notes below). While it’s always a treat to taste aged port, it was intriguing to notice how the older ports, despite their beguiling maturity, were notably less harmonious, fine and complete than their modern counterparts, especially those made in the latter years of AXA ownership.

By way of example, though it might seem heresy, we both preferred the 2003 and 2008 Vintage ports to the 1994 Nacional. Similarly, the 10-year-old and 20-year-old tawnies seemed more successful than the 40-year-old. The one set of wines that disproved this rule were the Colheitas, but then these theories rarely run smoothly. 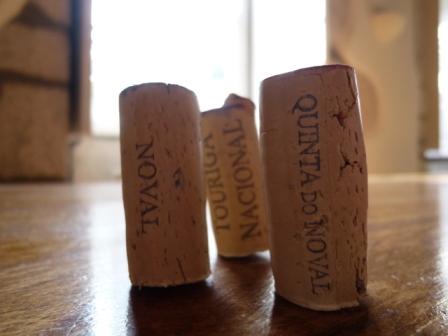 The table wines also seem a work in progress. While these were an AXA initiative, to our mind they all too often lacked freshness, spice and florality – the very essence of the best Douro table reds, especially when you have the likes of Syrah and Touriga Nacional at your disposal, as AXA do.

We’re particularly sensitive to excessive oak, alcohol and extraction, so I asked Seely if the style of the table wines were changing (we were mainly trying the 2008 vintage). He commented:

‘I think the style has evolved and is evolving. We have progressively been using less new wood and have discovered how delicate and fine the Touriga Nacional can be. Earlier Douro reds tended to have a lot of extraction and oak, and I think there is so much in the grapes anyway that neither are necessary or advisable.’

Perhaps a case of: watch this space? We’d love to see a floral, peppery, refreshing blend of Syrah and Touriga Nacional emerging from the estate before too long. Seely says he, ‘wouldn’t rule it out’.

The positive news is that the hard work and significant investment appears to be paying off at Noval.

The more recent ports are spectacular. Vintage ports like 2003 and 2008 were impressively seamless and vibrant, some of the best young vintage port we’ve ever tasted; the LBV is outstanding in its category and the 10-year-old tawny is excellent. 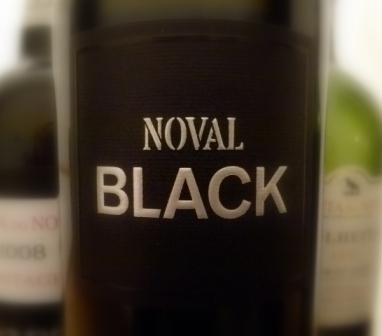 While we weren’t convinced by the latest addition to the range – Noval Black, strap-line ‘a staple for a new generation of port drinkers’ (with a recipe for making a cocktail involving ice and orange) – there is clearly a drive to innovate and consolidate at all levels here, which bodes very well.

Back in 2004 when I tasted Noval with Seely, I remember him explaining the renovation work in detail at the estate before signing off with an exclamation along the lines of: ‘you ain’t seen nothing yet!’

It will be fascinating to see just how much better Quinta do Noval can get in the coming years. Our hunch is that, while the operation is already impressive in its modern guise, it still has more to give.

NB: tasting notes and scores are mine but I’ve also included Susie’s marks (with the odd comment to clarify any significant discrepancies in scores)

Noval 10-year-old tawny port, 19.5% (c. €19) – nice burnt sugar aromas with nuts and spirity notes. Not the most complex but very good. Not at all fiery or raw like some 10-year-olds. Succulent, sugary, nutty. Has a density and elegance few have in this category. Very elegantly crafted, from good raw materials. Lacks gravitas of 20- and 40-year-olds but almost has better harmony for the money. 7/10 (Susie: 7.5/10) 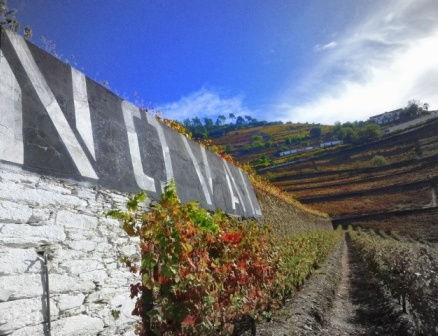 Noval ‘over-40-years-old’ tawny, 21% (c. €95, bottled 2011) – lovely developed nose. Verging on Oloroso territory: tons of toasted nuts, baked fruit and caramelised sugar. On the palate it’s fiery, spicy and grippy. A full-on assault on the senses! Not an entirely welcome one either… It lacks the elegance and seamlessness and harmony of many of the other ports. Perhaps it’s a reflection of how winemaking on this estate has improved under AXA. So while it’s a lovely taste of history, I think the 40-year-olds of the future will be better. Just look at the excellent quality of the 10-year-old to see this. 8-7.5/10 (Susie: 6/10 ‘not for the faint-hearted; too spirity, raw, not as fine as the previous two’)

Quinta do Noval Colheita tawny port 1997, 21.5% (c. €26-29) – deeper and more ruby in hue than the tawnies. Seems quite young, lots of candied fruit and caramelised sugar. On the palate it’s juicy and smooth initially, with a fiery finish but good integration. Nice length. Seems a bit young, actually. I think these wines need bottle age. Quite focused. But not at full potential. 7.5-7/10 (susie: 6/10 ‘too spirity and alcoholic for me, not as fine as the 10- or 20-year-old tawnies: gauche’)

Quinta do Noval Colheita tawny port 1968, 12.5% (c. €96) – lovely aged nose, dried fruit, muscovado sugar. Marmite and malty hints. On the palate it has lovely density and focus, for me so much better than the 40-year-old tawny. Grippy, almost seems younger. Lovely stuff – a bit too fiery for Susie – but for me a real piece of history, and similar in style and quality to the 1974 I tried in 2004. What’s more, a sublime match with the tangy, delicate queijo da serra sheep’s cheese. 8/10 (susie: 8/10) 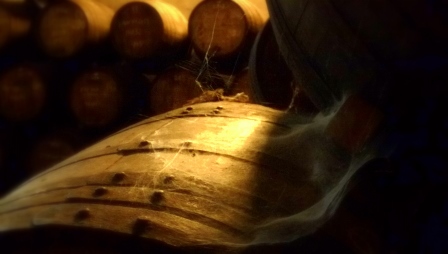 Quinta do Noval 2008 Vintage Port, 19.5% (c. €105) – 50% Touriga Nacional, 40% Franca and 10% Sousão; aged for two years in large vats. Very deep dark colour. Pure baked/raisined fruit nose, super young. Glossy. Dark sugar, bit volatile. Touch floral. Young on the nose but on the palate – a revelation. Beautiful texture and harmony. Perhaps lacks a touch of core focus on the finish, ie not an outstanding vintage, but so approachable, juicy, glossy. Might not be the most peerless ager but lovely lovely vintage port. 8(-8.5)/10 (susie: 8-8.5/10)

Quinta do Noval 2003 Vintage Port– gorgeous: seamless, pepper and fire but no burn. Touch floral. Seems reticent, as if it needs to age. But the palate is so harmonious, with flavours of roasted nuts and baked fruit. Young, but very drinkable indeed. 8.5/10 (susie: 8(-8.5)/10)

Quinta do Noval Nacional vintage port 1994, 20.5% (c. €2,400) – and so, a taste of history. The colour isn’t the youngest but is very tight to the rim. Lovely evolved caramelised plum and dark fruit nose, ageing nicely but not yet into tertiary characteristics. Definite peppery notes with dark chocolate and earthy hints. On the palate it has wonderful harmony, density and minerality. Still a bit spirity on the finish. Very good, though, resonant and fiery. I had a similar impression when I tried it alongside the 1963 back in 2004: supreme depth but a bit raw on the finish; definitely belonging to the modern port era but perhaps not to the modern Noval era. 8/10 (susie: 7.5/10)