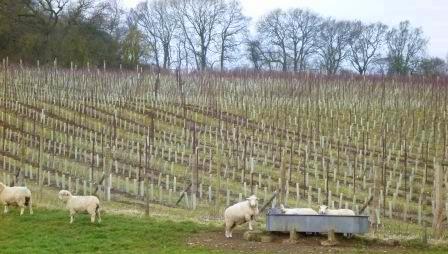 Happily, we’re having more than our fair share of exposure to English sparkling wine at the moment.

Susie recently paid a visit to the Balfour estate in Kent, while we popped in en famille to the very promising new Hattingley Valley venture just up the road in Hampshire.

Next week, Susie will be taking part once again the fascinating ‘Judgement of Parson’s Green’ tasting, in which top English fizz is tasted blind by a specialist panel of judges (with a few classic ringers from France, Spain and elsewhere thrown in for benchmarking purposes). You can read her report from last year, which generated quite a bit of heated debate, by clicking here.

We’ll be writing all of this up in due course but in the meantime we wanted to report on a fascinating visit yesterday to the new Coates & Seely sparkling wine project near Whitchurch, just to the north of our base in Winchester. 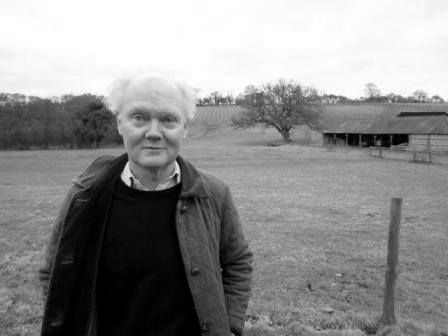 This is one of the more exciting English fizz operations to have emerged onto the scene lately. It’s a joint venture between old INSEAD business school friends Nicholas Coates – Hampshire denizen and former city man turned vintner – and Christian Seely, managing director of AXA Millésimes, the respected wine branch of the French insurance giant (though this project is resolutely separated from Seely’s day job).

Their recent debut release was a particularly tangy, elegant rosé (for our enthusiastic write-up, click here). Our visit was partly motivated by a desire to taste their newly launched Blanc de Blancs, but also simply to get to know this promising local wine project better.

In the course of our chat, we touched on many interesting topics – from their much-discussed ‘Britagne’ designation to concrete eggs, Napoleon’s retreat from Moscow, the importance of chalk and the contentious issue of pricing.

But we started with the background.

The two friends conceived the idea for the English fizz in Bordeaux after Coates had his local chalk soil analysed, and received the response from the French lab: ‘monsieur: vous avez un sol champenois’ (your soil is like that in Champagne). 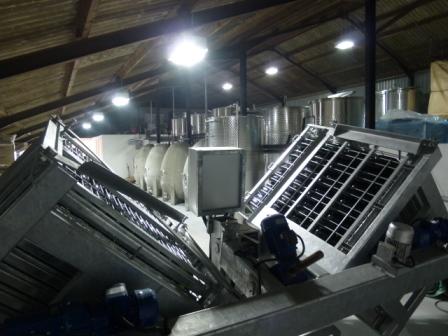 Coates relates, ‘So we thought: with an identical soil and similar climate to champagne, if we imported the best plants and expertise, there’s no reason why we can’t make a good wine and, in time, a great wine.’

The concept of harnessing the best of France to bring out the best in English fizz is very much at the heart of the Coates & Seely enterprise.

Both Coates and Seely are proudly Francophile in their outlook. ‘We’re passionately English,’ says Coates, ‘but we’re also passionate about wine, and we have a reverence for French expertise. In our view, the greatest fizz in the world is champagne, so you’re a fool if you turn your back on this and take a ‘little England’ view. Ultimately we want to express our terroir as best we can – and taking advantage of French craftsmanship and heritage can help us do that.’

The partners employ French winemakers as well as (unspecified) Champagne consultants, and have used Portuguese expertise in establishing and working the vineyard.

The main vineyard site is at the Wooldings, just north of Whitchurch. This is the site of a 20-year-old, 10-acre vineyard which became the nucleus of the project after Coates, who lives a mile and a half away, stumbled upon it in 2008. The vineyard was overgrown but, after significant reparation, some 3.5 acres of Pinot Noir, Pinot Meunier and Chardonnay survives, while the remaining 6.5 acres is being top grafted or reconstituted. 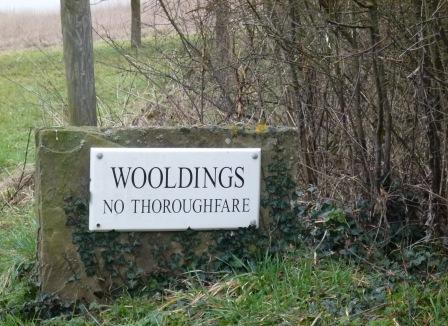 In the meantime, a further 18 acres of former maize field on an adjacent chalk hillside was planted in 2009; its first small crop came in 2011. Coates tells how, in July 2009, he was sitting ‘with his feet up – actually writing a book’ (on Napoleon’s retreat from Moscow: ‘the ultimate military journey’) – when they got to hear of a mature vineyard at Exton Park whose new owner had no plans for the fruit.

Once they’d agreed to buy the 2009 crop, there was an urgent need for somewhere to make the wine. Cue Coates’ swift removal of feet from desk and the arrival of stainless steel tanks, a sleek Bucher Inertys press, a few carefully sourced old barrels and the concrete Nomblot eggs (which give ‘softer flavours than the steel,’ according to Coates, albeit at prices ‘I’d rather forget’). All into an unassuming former dairy shed.

And so Coates & Seely were underway.

Now, nearly three years on, the first wines are emerging and the nature of operation is becoming clearer. And not just on the wine front. Significantly, Coates & Seely are also now expanding in a collaborative way – planting on behalf of several notable local Hampshire families (names are off the record) with the aim of putting much of the resultant fruit towards Coates & Seely wines and returning some of the wines to the landowners under their own brands.

This will enable Coates & Seely to expand production while, in Coates’ words, taking advantage of some ‘great land’. And the idea is that all these producers form part of the ‘Britagne’ initiative. 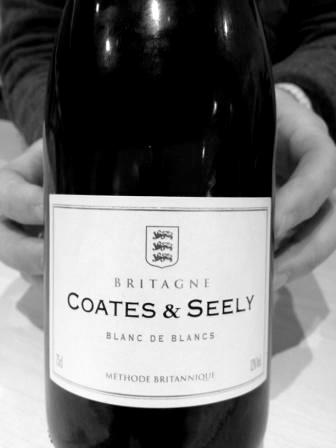 By way of background, there has been much discussion of late (including by us) surrounding potential names for English fizz to rival the romance and recognition of champagne. Merret is one (as espoused by Ridgeview) and, when Coates & Seely launched their proudly ‘Britagne’-labelled fizz, this was construed as an attempt to popularise an unofficial designation for English sparkling wine. The term was criticised for its overtly Francophone nature (back to the French connection again) in what is a nascent but proud English category.

‘We’ve been misreported about Britagne,’ responds Coates. ‘We’ve never issued a press release or put it forward as a generic name. There is no one word people will agree upon. We just want to prove ourselves with the quality of the wines, at which stage we’ll see where we are; initially, we simply want Britagne to be associated with the very best quality.’

Coates & Seely’s wines currently come with ‘Britagne’ (pronounced as in ‘Britannia’) on the neck foil, with the words ‘méthode britannique’ and the three-lion motif on the label. Coates staunchly defends the initiative, pointing to its clear potential to generate discourse and visibility, its associations to high-quality British produce and the fact that ‘foreign markets really get it’. He also mentions that, in time, third parties might be able to use it, but cautions that this would ‘need to build slowly’ and that, before this happens, the focus will be on making the best Britagne wines possible.

There will then follow some vintage wines – initially a Blanc de Blancs and a rosé, from the 2009 vintage – probably for release in 2014. The idea is to cater both for those who want ‘young, fresh, lively fizz as well as those who want something with a bit more gravitas,’ comments Coates. 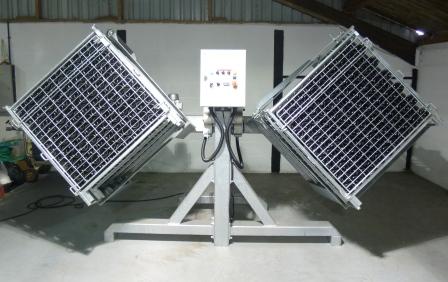 At which point we touched on pricing, to which Coates throws up his hands and exclaims: ‘It’s really tough!  We’re setting ourselves up as serious competitor to champagne – but we can risk sending out the wrong message if people perceive a £50 wine to be twice as good as a £25 wine.’

Their initial policy – with which, incidentally, we agree wholeheartedly – has been to price the fresher styles of non-vintage fizz at around the £27 mark: not cheap but comfortably under many big name non-vintage champagnes. The idea being to win over consumers with wines that represent good value in the market context.

‘We’re in this for the long-term,’ affirms Coates. ‘We’re not driven by short-term profit or machismo to say ‘our fizz is better than everyone else’s’. We want to be accessible.’

While Coates won’t be drawn on prices for the vintage wines, however, he implies that they will be significantly higher, on the basis that volumes will be tiny, quality will be high and citing the need to make a capital-intensive business profitable.

As for our take, it’s clear that Coates & Seely are serious and ambitious players in what is a very exciting category. Their initial wines (see the note on the Blanc de Blancs below) have been commendable, with great purity and a harmony/elegance/resonance not often found in even the best English fizz (perhaps a result of that unashamed Francophile approach?) 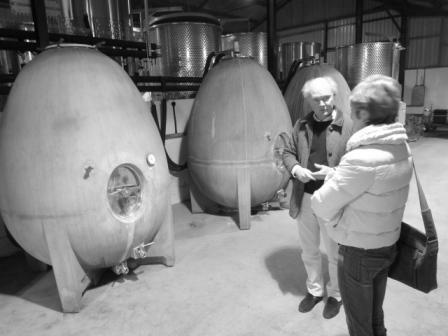 With the new vineyard coming on stream and a growing bank of reserve wines available for future wines, Coates & Seely is looking comfortably set to join the ranks of the premier league of English – indeed, global – fizz makers.

Coates & Seely Blanc de Blancs Britagne NV, 12% (c.£27 from Coates & Seely) – hugely impressive. Has a seamless purity and elegance to it – a nobility, for want of a better term – often lacking in other English fizz. The aromas open up with gentle cream and wood-smoke hints, and notes of green apples. Very deftly constructed palate profile with brisk acidity and beautifully judged dosage (10 g/l). Vibrant, direct and very persistent. Bodes well for the vintage. 7.5/10

Notes: A blend of fruit from the Wooldings and Exton Park vineyards, all from the debut 2009 vintage, with 15 months on the lees (so the 2009 vintage Blanc de Blancs will be the same wine but with three years on lees).