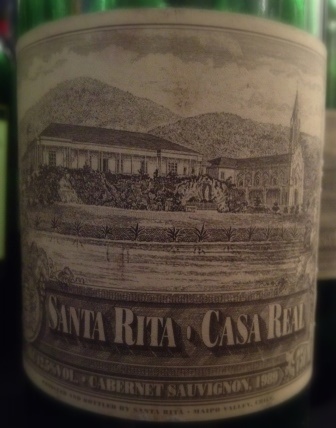 Flying back from Chile last week, I was lucky enough to be upgraded by the nice people at BA – all the way to First Class.

The irony was that I had to work through the night writing a presentation for the two-day Santa Rita Estates (SRE) workshop I was co-chairing on my return.

So, while my fellow passengers availed themselves liberally of Laurent Perrier’s Grand Siècle, O Fournier’s Alfa Centauri Sauvignon Blanc (a recent recommendation of mind from Decanter), and Château Smith-Haut-Lafitte 2004 – not to mention the luxurious pyjamas – I tapped away, jutting-jawed, hunched over the bleak light of my laptop.

With hindsight, it was time well spent. The workshop – which I’ll come onto below – was both fascinating and enjoyable, and my talk seemed to go down well. Even if it did tail off a tiny bit towards the end (well, I couldn’t resist all that lovely wine for the whole flight…)

The workshop was part of an ambitious new drive by SRE to be at the forefront of education about South American wine in the UK. To this end, they flew over highly respected Australian winemaker and terroir militant Brian Croser, who has consulted for them since 2009, as well as a host of winemakers and wines, for a two-day trade and press seminar.

The idea was to explore South American wine through the prism of SRE’s wines. (The group comprises Chilean wineries Santa Rita, Carmen, Nativa and Terra Andina – as well as a stake in Los Vascos – plus Argentine producer Doña Paula.) But, laudably, the tastings weren’t just restricted to SRE wines, with regional benchmarks from other top producers (ie Casa Marin, SoldeSol, Casa Silva, Noemía, Colomé) represented for context. Together with Tim Atkin MW and Richard Bampfield MW, I was drafted in to give independent context and expertise.

By way of background, I’ve tended to see Santa Rita as a traditional Chilean stalwart – more in the cruise control lane rather than warp speed like some of the more dynamic Chilean producers. Group owner and Chilean tycoon Ricardo Claro died recently and in doing so robbed the wine operation of a powerful figurehead and driving force. Failed bids for Francisco de Aguirre (Limarí) and Undurraga (Maipo) could have stymied expansion but initial results from new vineyards in Pumanque (coastal Colchagua) and Limarí have proved encouraging.

In this context, it was interesting to chat to Brian Croser over the two days. He talked of encouraging the group’s leadership to move into new areas – like quality sparkling wine production, or planting in the deep south, and Riesling as a variety well suited to Chile’s diverse terroirs. Above all, he talked of focusing on terroir. He was convinced that all these initiatives would prove successful in Chile. He described his work as ‘a consultancy of love’, travelling four or five times a year (‘sometimes I give them extra – a consultancy BOGOF,’ he quipped), but the reason he liked it so much was that, ‘it’s an easy place to love – and Chileans are very open intellectually.’)

Afterwards, he wrote me an email, saying: ‘I am sure improvement can be made and change is essential anyway. Santa Rita are a lot more progressive than their image might suggest.’

No doubt it will be worth keeping an eye on new developments in this sense. In the meantime, Croser was focusing mainly on the fine tuning that’s being carried out within SRE to improve what might be termed the traditional Chilean offering: Cabernet-family grapes from classic regions like Maipo and Colchagua. 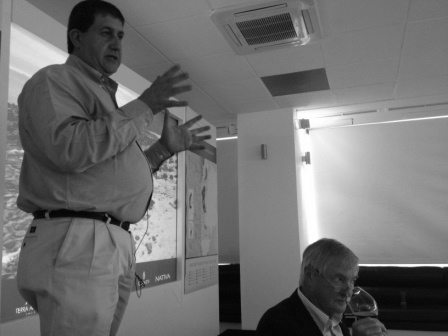 ‘Arguably’, he commented, ‘the future of Chilean fine wine lies in maintaining and refining its traditional Cabernet family wine personality and at the same time diversifying far from it.’

He talked of how he spends most of his time in Chile ‘climbing into holes’. He said, ‘I know more about the underside of Chile than I do about the underside of Australia by a long way. And it’s quite an attractive underside: the soils and geology are very special, this is partly why I accepted the consultancy [Croser went on a Chilean terroir tour with a geologist in 2005]. I take the dust home with me; it has a very different smell to Australian dust. Pumanque has almost edible soils: some of the best viticultural dirt I’ve ever seen.’

He identified the diversity of soils and climates as well as the natural diurnal range of temperatures as being responsible for creating the unique taste of Chilean Cabernet – a profile that will be improving as new vineyards like Pumanque come online. ‘Chile’s winemakers are spoilt for choice,’ he observed, adding: ‘that’s why I’m here’.

It was fascinating to hear Croser’s perspective on Chile, clearly a country with which he feels a strong attachment. Interestingly, this is his only consultancy, and he evidently feels there is plenty of potential for development.

My talk was entitled, somewhat provocatively, ‘Heritage and Heresy in South America’. I’ll be posting a piece under this title very soon on this site but suffice it to say it was an update on the very latest happenings on the South American wine scene (with a bit of history for context), emphasising how fast Chile and Argentina are moving, and how important it is for the UK trade to keep up to speed.

Over the course of the two days, we tasted several wine flights.

Some were themed by grape variety and considered the influence of regionality within Chile and Argentina. In this context, it was instructive to see the significant stylistic diversity of Sauvignon Blanc, Chardonnay and Carmenère within Chile; also Malbec in Argentina from Cafayate to Río Negro via Mendoza.

Finally, there were two vertical flights of Santa Rita’s iconic Casa Real Cabernet Sauvignon, one going back to the very first vintage: 1989. 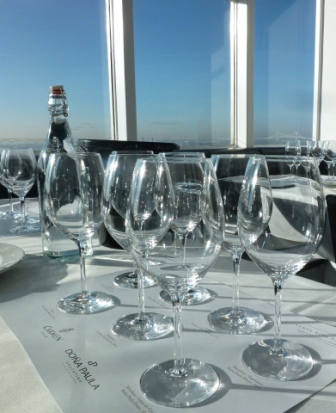 Selected tasting notes from these flights appear below. Some of these notes were perhaps not as considered as I’d usually like to be, given I was chairing or speaking as well as tasting, so not ideal conditions for quiet cogitation (and hence the terse notes).

Nevertheless, it was great to get a good feel for these wines, some of which will never be seen again (for example, after this tasting, there are only seven bottles of the 1989 Casa Real left in the company).

It was also a privilege to have on hand the likes of Andrés Ilabaca (whom I interviewed recently – tasting a 1987 Medalla Real Cabernet at the same time) and Cecilia Torres, who very rarely makes grand public appearances even in Chile, let alone London.

By way of summary, the Casa Real vertical tasting was a treat. It was like witnessing a personal narration of the history of modern Chilean wine, as told by a vineyard. So much change – in the winemaking approach, for example, or between vintages. But so much consistency too – of terroir, that feeling of dried fruit and warm earth, crisp acidity, fine firm savoury tannin, and old-vine density and lucidity.

It’s salutary to think that no other iconic Chilean wine could (I believe) have put this tasting on – from the same vines, the same wine, made by the same winemaker every year since its inception in the late 1980s. Casa Real is sourced from one block (Carneros Viejo) of old-vine Cabernet Sauvignon in Alto Jahuel, next to Santa Rita’s winery in Alto Maipo, on the Andean piedmont. It sits at 500m above sea level and the first vintage was 1989, selected on the basis of the quality of its tannin, according to Torres.

As one taster (Martin Moran MW) pointed out, when he first bought Casa Real in the 1990s it was £9.99 – and he baulked at the price. But at the time he recalled that Grange Hermitage was around £19.99. If you compare prices now, Grange is anywhere up to £300 a bottle, while Casa Real is still around the £25 mark (eg at The Wine Society). Remarkable.

Ultimately, it’s important, especially for us journalists (essentially magpies easily entranced by the lustre of all things novel) to remember that Chile is just as much about its traditional fortés as its innovation. On this showing, Casa Real is persuasive evidence of the former – a wine with real ‘pedigree’, as Brian Croser aptly put it.

Concha y Toro Carmín de Peumo 2008, Rapel, 14% – soy, tar, ripe fruit. Glossy. Quite fluid and leafy, so a different style to the Apalta, but it works in this context. Not OTT, juicy and refreshing, with nice notes of roasted red and green pepper. 7-7.5/10

Casa Real 1989, c.12.5% – lovely dried fruit, leather and tobacco nose. Lots of age here. But lovely cogency and fluidity on palate. Still got good juicy acid. Earthy tannins. Speaks of site. Not at all decrepit. Roasted green pepper, may have been green and mean when young! But it’s a lovely old school, traditional Chilean Cab, just lovely to drink. Reminds me of the 1987 Medalla Real Cab. A treat – and a fascinating insight into the old world of Chilean winemaking (eg fermenting in raulí), before the modern era really took hold. 8(-8.5?)/10

Casa Real 1995, 13.5% – much deeper in colour compared to the 91 but still developed, brick hues. Leathery, meaty, bretty aromas. Much more solid in structure and concentration versus the 91, which was lighter. This is fuller, more macho, more extracted. Sinew and brawn. Still works. But you can see things changing! This is a transitional style of wine between the lightness of the previous vintages and the power of the modern era. Quite extracted and chewy. Good ripe vintage. Lots of wine. But also savoury and good acid. Hasn’t dried out. But the more I come back to it, the less I like it. 8-7.5/10 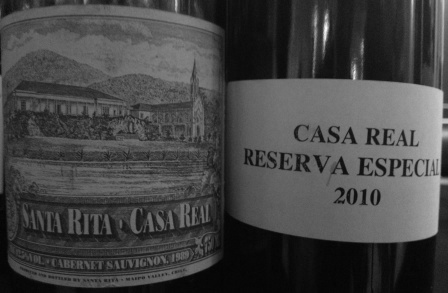 Casa Real 1997 – I took this bottle to dinner afterwards and served it blind to some esteemed wine connoisseurs. They didn’t know where to put it – from Bordeaux to California. This wasn’t my favourite vintage on show – a bit mute and earthy. But with a lovely fluid, earthy flavour profile, grippy and beautifully structured. Not OTT even tho a hot year. A bit worked, though. 7.5-7/10

Casa Real 1999 – black pepper and black fruit, with a pleasant earthy tobacco kick. Good acidity, earthy tannin, savoury notes: very good finish. Quite chunky but still very well developed wine. Still has lots of time to go. But a bit foursquare on finish. This was a very dry year, which made the tannins a bit more ‘rustic’ according to Torres. Not my favourite, but creditable given the conditions. 7/10

Casa Real 2005 – super creamy aromas. Dusty. Dried fruit. Resinous hints. A bit over-wrought for me. Too extracted. Too oaky. The core sort of gets swallowed here beneath the winemaking. Shame! Perhaps my least favourite of the lot because it’s the most worked and self-consciously ‘modern’. Almost a caricature. Some in the room liked it, though, and maybe its grippy, refreshing structure will save it in time. 6/10

Casa Real 2008 – mute, slightly stewy nose. Lovely tannic charge. Savoury. Earthy. So so young – a very good sign. Tellingly: not too oaky. Coming out of the transition, for me. Lovely core, earthy tannin, this will be a sleeper: will age well. But needs 5 more years at least to start showing. Croser’s favourite, for its ‘real Maipo character’ and I’m not far behind him. 7.5(-8)/10