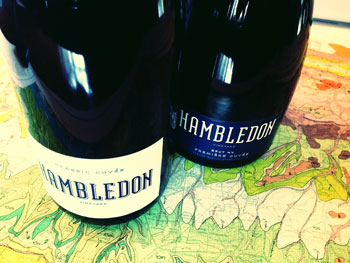 ‘I don’t just aspire to make the very best English sparkling wine, I want to make an iconic British brand.’

It’s fighting talk from Hambledon’s Ian Kellett – but encouraging to hear such ambitious aims from an English wine producer when not long ago very few would have dared dream, let alone voice such lofty aims.

We popped into Hambledon, one of our local Hampshire sparkling wine producers, to talk and taste through new developments at this forward-looking estate which lies south-west of Petersfield in the South Downs. The location is important, as Kellett goes on to pore over geological maps which indicate that, while much of Kent and Sussex is in fact based on greensand (a kind of sandstone) the chalk that the vines love in Champagne is actually more commonly found in Hampshire and, to a lesser extent, Dorset.

‘The wines of Winchester were famed for their quality in Roman times,’ continues Kellett. ‘It’s not enough just having chalky substrate, you also need a south or south-east facing slope. We reckon that only around 5% of the South Downs is what we’d term ‘ideal’ for growing top-quality sparkling wine. Champagne has spent around two or three hundred years getting to this point, we’d be wise to learn from that experience.’

We tried samples of the new Hambledon Classic Cuvée, which is due for release in May. (And which, incidentally, I took on the Daily Politics show after filming there recently – the Baronesses were intrigued.) Also the Premiere Cuvée, which will be the top tier when it’s released, and the Mill Down Brut, the only wine currently on the market. 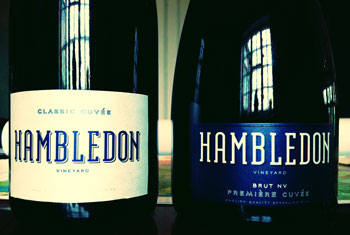 Kellett also revealed that Hambledon have just bought nearby producer Meonhill, part of the estate’s plans to increase production steadily to eventually reach the million-bottle mark with purely own-grown fruit. And this is a man who knows about business growth – he still works in Mergers & Acquisitions in the city, having bought Hambledon in 1999 and since re-developed what is England’s oldest commercial vineyard, which was first founded by Major-General Sir Guy Salisbury-Jones in 1952. Total investment to date has been nearly £10m and more is expected to follow.

The grand plan is to export two thirds of production, entering markets on the basis of quality and prestige image associated with classic English values including cricket. Hambledon is known as the cradle of cricket and the company’s logo is based around the origins of the game.