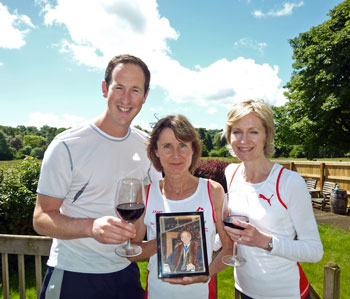 The one notable exception is what they call, ‘the longest marathon in the world’. (It sounds better in French.)

We’re talking about the Marathon du Médoc, the one that takes in the grand chateaux of Bordeaux – and the one where they ply runners with wine and oysters en route. Hence the ‘longest’ joke – the point being the runners meander around the course after all the wine rather than running in a straight line, the upshot being a tad more than the usual 26.2 miles…

Susie and I had the idea to run this particular marathon after our good friend and all-round wine hero Michael Cox died earlier this year from cancer. (Here’s our tribute.)

What better way to celebrate his amazing, often selfless life and achievements, we figured, than running a marathon linked to wine in aid of two of his favourite charities: The Vintners’ Foundation and The Benevolent? Especially one where fancy dress is not only welcome but almost obligatory (this year’s theme is ‘countries of the world and their carnivals’ – any suggestions or ideas much appreciated!) After all, as well as being Master Vintner and supporter of many good causes, Michael did love a bit of dressing up… 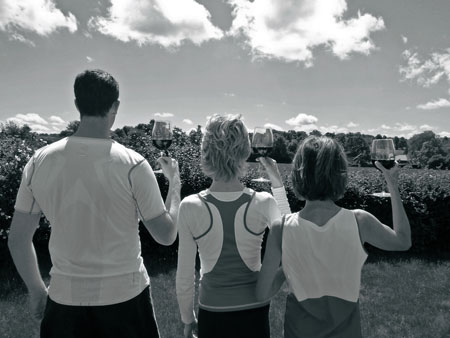 Two châteaux – Brane-Cantenac and the Bartons of Léoville and Langoa – have very kindly welcomed us into their running teams. (There’s even rumours of Brane’s head honcho Henri Lurton getting into training this year, having heard of our cause.)

We have a sizeable and perfectly formed team of brilliant people undertaking this challenge with us. Michael’s wife (and GB runner) Lynne, pictured with us above and left, may well be the group’s front runner. Handford Wine’s Greg Sherwood MW is pretty handy around a racecourse as well as his claret. We have a fine representation of plucky Chileans – Eduardo Chadwick, Francisco Baettig and Andres Izquierdo of Errázuriz plus Alvaro Arriagada from Wines of Chile. We’ve also been joined by Andrew Shaw of Bibendum Wine plus Sebastian O’Keefe of Amazon (running under d’Angludet colours) and Vicky Thompson, also of Handford Wines. Michael’s identical twin brother David, chief executive of The Benevolent, is campaign manager.

We will be posting updates on our progress and reporting from Bordeaux here in due course. There’s already been a bit of press interest – thank you Harpers and The Drinks Business for supporting the cause.

Naturally, any donation or expression of support, however modest, would be extremely welcome and gratefully received. Here’s a link to our Just Giving page – and heartfelt thanks to all of those who have already generously supported the cause.

Thanks! And wish us luck…