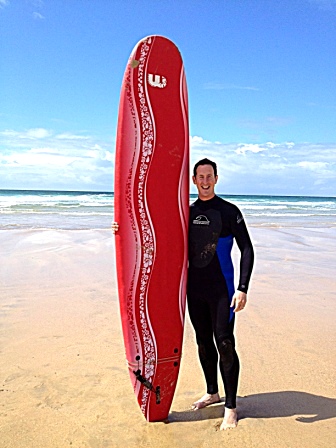 There really was only one thing for it when we filmed the final Saturday Kitchen wine shoot of the season in Newquay, on the north Cornish coast.

And that was to pull on a wetsuit, grab a surfboard – and have a wonderful time flailing about in the good old British briney.

None of this was to distract, of course, from the very serious purpose of choosing wines to go with dishes by Ashley Palmer-Watts – Heston Blumenthal’s right hand man and executive chef at the celebrated Dinner at the Mandarin Oriental – and the magnificent Tom Kerridge (The Hand & Flowers).

I must have been concentrating because James Martin later said, at the end of the show: ‘We’ve had some great wines on the show lately – and Peter’s chosen some cracking ones today.’

Ashley was preparing an elegant dish of cured grilled mackerel with broad beans, peas, cucumber and pickled lemons. I toyed with the idea of an English white – especially after our trip to Camel Valley – before settling on the great value Taste the Difference Verdicchio 2011 (£6 on multibuy offer, Sainsbury’s).

Ashley described it as, ‘perfect, really works well’ while James flagged up its great value.

This deserved something special. Carmenere, Shiraz and Pinot Noir all featured in the final line-up but it was a delightful wine with a difference that got the final nod: the Extra Special Dão 20010 (£5 on rollback, Asda). At the reduced price, it’s a steal, so snap it up. 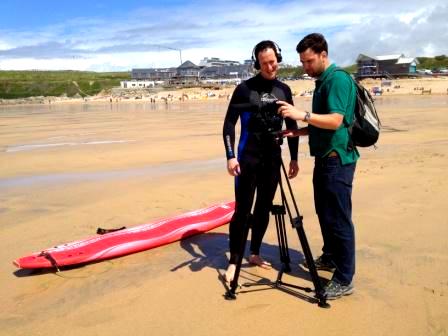 You can watch the show until Saturday (21st July) via iplayer – wine bits at 15:20 and 56:00. This was the final show before the summer break so it will be tasty best bits for the next six weeks. Also featured on this show were Rick Stein (appropriately), Celebrity Masterchef and Keith Floyd.

The recipes from this edition can be found via this link on the BBC site. They also include James Martin’s pan roasted duck with ginger chutney, asparagus and Tenderstem broccoli, strawberry charlotte and crispy breadcrumb squid with creamy ponzu dressing and Chinese leaf salad.