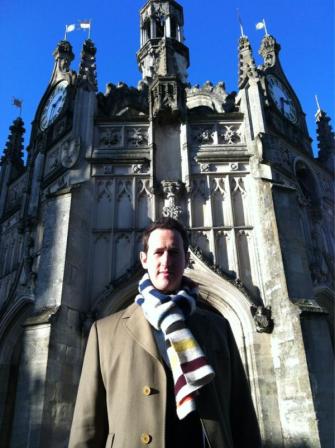 Getting Saturday Kitchen host James Martin excited about wine (rather than, say, cars) is not easily done.

Unless it’s rosé, in which case the passion is of the decidedly negative variety.

So it was a great pleasure this week to see the big fella get passionate about Les Pierblancs Sauvignon Blanc 2010 (£8.99, Marks & Spencer), which I’d recommended to go with L’Anima chef Francesco Mazzei’s Sardinian fregola with squid.

‘It’s proper stuff, this!’ he exclaimed, which surely must be about as energetic a compliment as I’ve heard from this proud Yorkshireman in the show’s history.

‘I love it – what I’d class as a quaffable wine wine: you don’t need to eat with it,’ he enthused.

I have to say that it’s the kind of wine that gets me hot under the collar – subtle, elegant, mineral-laden, utterly food-friendly, great value – and I was delighted to be able to give it an airing on the show.

We’d used it at the BBC Good Food Show in Birmingham and it went down a storm there – even winning non-white-drinking actor Laila Rouass over to the virtues of vin blanc.

Francesco commented, as I had on the VT, that a good option would be to stay local with the wine (I mentioned Greco di Tufo, he suggested Vermentino from Sardinia). Beyond this, he said it, ‘goes very well, with the lemon, hint of chilli and herbs’.

Lots of options for this one – I weighed up quite a few in store, including the Poggiotondo Chianti (£8.99) and Rioja Ibéricos Crianza by Torres (currently on offer at £7.49).

Both of these would have worked very well – but in the end I plumped for the brilliant value Minervois 2009, Gerard Bertrand (£7.49, Waitrose).

James said it was, ‘a bit of a bargain – another great wine’ while Adam explained how he loved Syrah and commented, ‘it works really well with the pheasant’.

As ever, you can catch the show (which also includes archive material featuring Rick Stein, Keith Floyd and Celebrity MasterChef) via the BBC iplayer for the next week (ie until 11.2.12). Wine bits – filmed in chilly Chichester, incidentally – are at 14.20 and 56:50.

Recipe details for all the above – plus pan-fried mackerel with beetroot and celery salad, chicken pad thai and traditional Lancashire hot pot – can be found on the BBC site here.

Thanks to Cactus TV/BBC1, here are the wine clips from the show – filmed in chilly Chichester, incidentally. For starters, it’s Francesco’s fregola: