We were really chuffed to hear that The Palate had won the gong for Innovation at the OLN Drinks Retailing Awards at the Dorchester the other night.

Thanks to the judges, and congratulations to all the team who’ve worked so hard to make this competition such a success. (Kudos to all the other worthy winners, too.)

We’ve been proud to help develop and front the concept over the last two years. Essentially, it’s a competition in which contestants pit their wine tasting wits against each other, with one winner finally being crowned as The Palate. We run competitive bootcamps for the dozen or so finalists (for the record, Susie’s alumni have won both…) and then judge the final. 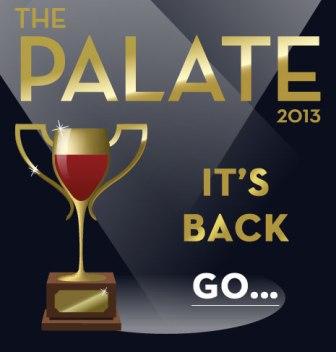 The idea is to make the competition as inclusive and fun as possible – and to reward passion and imagination more than just encylopaedic wine knowledge or experience. Last year nearly 10,000 people took part and we’ve been blown away by the sheer talent and love for wine that has been displayed in both finals so far, especially by winners Fran Evans (2012) and Chloe Dickson (2013).

That The Palate was recognized for innovation is, we think, particularly appropriate. It may not be the most original competition idea but the way it works for wine is brilliant, and really encourages people to get involved in and enthused about wine in ways they might not have thought possible. The most common refrain we hear in the finals is, “I never thought I’d get this far/be able to do this’. Special congratulations to organisers Oddbins (and, particularly the bright ideas machine who is Ayo Aktintola) on this front.

You can read our report on last year’s competition here – and there’s also a video below, made by the brilliant team at Stepping Stone.  We’re currently plotting how to make the 2014 competition notably bigger and better – and we’ll post more details about this in due course. So watch this space if you fancy a chance of becoming The Palate 2014!