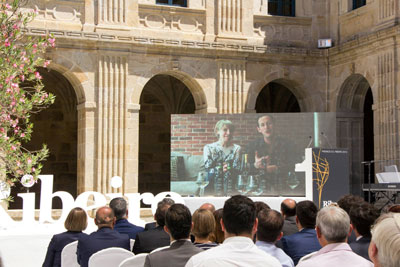 Susie and I were very chuffed to win Best Wine Communication award at the recent Ribeiro Awards in Spain.

I’d been out in February to speak at the Atlante conference alongside luminaries including Claude Bourgignon and, having seen our wider work in action, they decided to recognise us at their annual awards ceremony alongside various Michelin-starred chefs and some of the top winemakers in the region.

Sadly we couldn’t make the ceremony as we were travelling in France but we did send a video message – as pictured (right). In my over-excitement I must admit to speaking in garbled Spanish. Susie, wisely, stuck to her native tongue.

Below is a longer video of the whole awards ceremony and event, which took place in the beautiful Monasterio de San Clodio that I visited in February. You can read my piece on the visit via this link – north-west Spain is such an exciting wine producing area at the moment and I for one learnt a lot from being in situ.

Our thanks to DO Ribeiro – and indeed everyone who makes our job such fun, and so worthwhile.