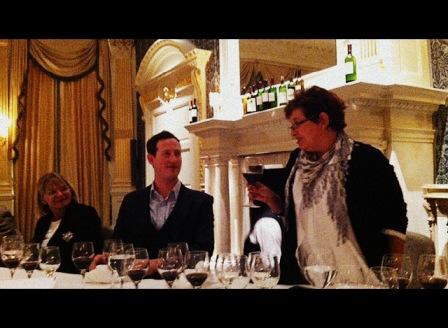 Grape varieties are the sign-posts of the wine world – they help you set a context and expectations for whichever wine you’re about to drink.

Cabernet Sauvignon is familiar to most wine drinkers, both in terms of its name and its firm, food-friendly style.

Wine experts occasionally give Cabernet a kicking for being boring or predictable – jibes, one suspects, often motivated by disenchantment with Bordeaux, where Cabernet is a regular feature, than anything else.

But I have no shame in admitting that I love Cabernet’s forthright charms. Yes, it often has a distinctive character, but it can be pretty versatile too – and when it sings, in a mid-weight, savoury, insistent style, then it can be sublime. (The problems come, in my mind, when it’s made badly – the worst examples being overblown, over-sweet, alcoholic, mind-numbing monsters…or the mean and green styles when it’s unripe.)

I’ve been lucky enough to do a few pretty grand Cabernet tastings recently – see my blogs on the Seña, Wines of Chile in Brazil and Wolf Blass events – but the one recently put on by Santa Rita Estates (SRE) was fascinating.

It was billed as, ‘A global exploration of one of the world’s greatest grape varieties’ and some of the UK’s finest palates were assembled, as well as the eminent presence of Australian Brian Croser, who consults for SRE.

There were many lessons from the tasting. Perhaps the most salient was the distinctiveness of Chilean Cabernet in a global premium context. Some present thought this was a negative – especially those who found fault with the Chilean styles – but many other tasters present, Croser included, found it a positive, stressing the importance of having a recognisably distinctive style in the vast ocean of top Cabernet around the world.

Personally, as you can see from my notes below, I still think Chile has a way to go with Cabernet (a point graciously conceded by Cecilia Torres, winemaker for Santa Rita’s top Cab, Casa Real).

Too often, top Chilean Cabernet is monolithic and overdone. Instead of grace and savoury charm we have overly sweet fruit, prickly alcohol and a head-pounding charge of cassis juice, with little in the way of light relief or complex nuance.

It’s by far and away Chile’s most widely planted variety but I think that in itself has engendered a vague apathy. What Chile needs with its Cabernet is for growers to have the will to experiment, take risks and push boundaries – ie by developing new and exciting terroirs for Cabernet away from the warm viticultural heartlands.

But it seems there is more appetite to do this with sexier varieties like Sauvignon Blanc, Chardonnay, Syrah and Pinot Noir.

Chile is making progress with its Cabs but there is much yet to be done. In my view, as contentious as it may sound, Chile’s truly great Cabernet terroirs are yet to be found.

Château Pontet-Canet 2008, 13% (65 CS, 30 Me, 4 CFr, 1 PV) – earthy gravelly nose. A bit stewed. Interesting… Nice lovely savoury tannic filigree texture. This one is all about the palate feel! So savoury, not at all sweet. A little bit of warmth on the back palate. But real intensity allied to savoury pleasure to youth (but balance!) Undoubtedly one of the wines of the tasting. 8.5/10

Cullen Diana Madeline 2009 (88 CS, 6 CFr, 4 Me, 2 Mal) – leafy green been and red fruit – but not as overtly green as the Jordan. This one it’s more of a perfume. Seems to have the imprint of Margaret River. It’s compact and vital but also rounded and very persistent. Resonant. Lovely stuff – direct, pure, Perfectly formed. Alcohol in perfect balance with body. One of the stars of the tasting. 8/10 (It was interesting to note how well this showed compared with the 2008 vintage which I tasted in the Wolf Blass event. Though I note that Vanya Cullen rates the 2009 vintage very highly, so perhaps that’s it.)

Domaine De Chevalier 2009, 13.5% (66 CS, 28 Me, 6 PV) – deepish hue. Toasty nose. Attractive. Toasty, cedar and gravel. Dry attack. Very very fine tannin. Does get a bit hot and toasty on the finish but it’s impressive Cab. Just a tiny bit alcoholic. But has beautiful acid and tannic texture. Young. Filigree. Very classy; I’d just prefer a tiny bit less exuberance. 7.5/10 (This proved to be one of the favourite wines of the tasting by general consensus – the plush charms of the 2009 vintage working their magic, perhaps.)

Santa Rita Casa Real Cabernet Sauvignon 2008, Maipo, 14.4% – grassy minty cassis juice. Earthy dusty hints. Very hot and prickly. I think this is Chilean, with some decent distinctiveness in the context, and elegance, but it’s just trying too hard. You can taste the alcohol as soon as it goes in your mouth. Shame. 6.5/10 (I rated this lower than many tasters, including Brian Croser, for whom it was his equal favourite of the flight, pointing out its classically Chilean, ‘exotic’ character.)

Carmen Gold Reserve Cabernet Sauvignon 2010, Maipo, 14.4% (100 CS) – dusty stewed bean aromas. Seems to have a reductive edge, doesn’t seem entirely clean. Just pretty earthy and dusty. Quite aggressive in its tannin, acidity and alcohol. Certain sour edge to it: certain early harvest element to it?! Not bad but not good either. Trying a bit too hard. 6-5.5 (See notes above for Croser’s take on this ‘reductive’ quality in Chilean Cab.)

Santa Rita Casa Real Cabernet Sauvignon 2010, Maipo, 14.4% – grassy plum fruit, not the most distinguished or inviting. Prickly, hot and forced on the palate. Young, yes, but also a bit sour and aggressive. Not readily drinkable. Fine, but not exciting. Just young? 6/10

Te Mata Coleraine 2009, 14% (52 CS, 43 Me, 5 CFr) – mid deep, quite youthful. Gravelly stony nose, not super expressive. Leafy; some nice green herbal tones. Dusty. Quite aggressive on the palate, seems hard-edged and awkward. Angular and drying. Too green and hot; aggressive and sour. Not a great example of global Cabernet. 4/10