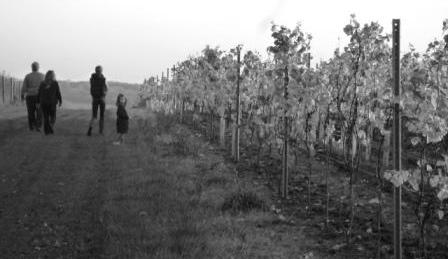 We’ve been enjoying a series of mini-visits lately to up-and-coming English fizz producers – mainly around our base in Hampshire.

In addition to Coates & Seely, we recently visited Hattingley Valley, located south of Basingstoke in an area known as the Lower Wield.

Though Hattingley hasn’t released any wine yet, we were intrigued to have a nose around the vineyards and winery as well as meet the owner Simon Robinson and catch up with winemaker Emma Rice.

It was an instructive visit (albeit an informal one, what with our young children keeping everyone on their toes – tractors being a particular point of fascination…) We didn’t try any wines, which are due for first release in 2013, but the facilities are impressive and it was good to chat with both Robinson and Rice about their laudably ambitious plans.

One thing that did come of the visit was me managing to cajole Emma into writing a harvest report from the low-yielding 2011 vintage for us (see below).

We’re hoping to be able to persuade Emma to contribute to the site on a more regular basis – featuring as we do plenty about home-grown wine. She’s one of the best connected winemakers in the country as well as a published writer (she wrote the English section of the Wine Opus book, for which I edited the South America section).

But of course all of this means she’s also tremendously busy, so we’ll just have to make do as best we can. In the meantime, her harvest report below is pretty technical in nature. It comes prefaced with Emma’s biog and an introduction to her independent winemaking operation, Custom Crush UK.

(As a post-script, you might also like to read another, more Sussez-centric report of the 2011 vintage in our final instalment of Diary of an English Vineyard.) 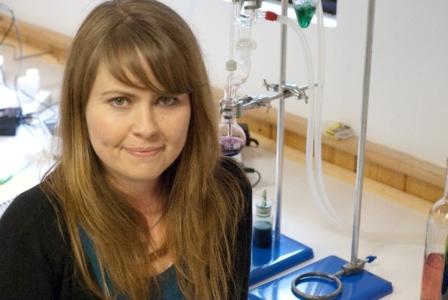 Emma consolidated the knowledge gained at Plumpton with post-graduate experience working for Cuvaison Estate Wines in Napa Valley, Tamar Ridge winery in Tasmania, along with vineyard experience in New Zealand and a stint at Nyetimber Vineyard and winery in England.

Also a graduate of the Wine & Spirit Education Trust’s Diploma, Emma has now been accepted on to the Institute of Masters of Wine education programme, embarking on the marathon of tasting and years of study that this entails.

Combined with her time within the retail and wholesale wine trade and three years as editor of Hugh Johnson’s Pocket Wine Book (Mitchell Beazley), Emma’s experience gives her an invaluable insight into the UK wine industry as a whole.

Emma is also on the committee of the South East Vineyard Association (SEVA) as Social Secretary, and is a member of the Technical Committee for Winemaking as part of the WineSkills Sustainability Forum.

Custom Crush was founded in 2008 by Emma Rice as a mobile wine analysis service and winemaking consultancy. Within a year the laboratory was established at Chilgrove, West Sussex to provide a more extensive analysis service to the burgeoning English wine industry.

Now undertaking analysis work for 25+ wineries in the UK, Custom Crush UK Ltd also makes wine for a growing number of clients at the Hattingley Valley winery. Wine styles made at the winery include small volumes of still red, rosé and white wines through to large-scale sparkling wine production. The facility can process as little as 600 kgs up to hundreds of tonnes grapes.

In the laboratory we saw a lot of clients leaving ripeness monitoring until quite late in the season – end of September – not quite believing that the grapes could be ripe after the cold summer. 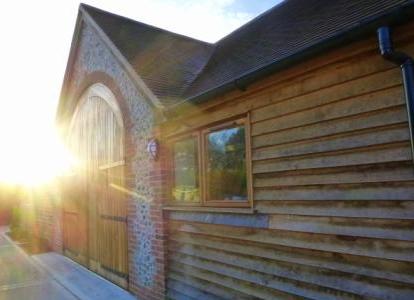 Once we started testing the Pinot Noirs it became quickly apparent that the acids were dropping way below normal levels, whilst sugars were up at acceptable, if not excessive levels. Total acidities of 11-12g/L were not unusual and it meant that some quick picking decisions were made.

The small berries, uneven development and tiny bunches meant that yields were way down and a lot of the berries didn’t have seeds – this may go some way to explaining the ripeness levels – less work for the vines to ripen what was left after the poor flowering. There was more even ripening in the Pinot Meuniers generally but they also started to drop acid all of a sudden.

Of the still varieties, Pinot Precoce started coming in to the winery on 16th September, with no need to chaptalise as potential alcohols were at 11.5%+.

Dorset and Devon were particularly advanced, with really well balanced acids and sugars. I was reminded of my time in Napa Valley as my pH meter was taking readings at >3.4! In September! My colleagues in Napa were panicking about botrytis and under-ripe Pinot Noir well into October. Botrytis was not generally an issue for the 2011 harvest in the UK.

The main Chardonnay crops didn’t start to arrive in the winery until the first week of October, with Kent fruit coming in first this year (it was the last county to pick in 2010). Sussex followed Kent by a week or so then Hampshire came in last with Dorset bringing in Chardonnay at the tail end of October. Some vineyards picked under pressure of frost and rain being forecast and acids were still high in some lots. But nothing unmanageable.

The Indian summer saved the ripeness of the Chardonnay crop across the counties – but with the warm weather the vines caught up and picking dates weren’t all that different from previous years.

One major factor was the tiny yields across the board. Talking to various vineyards across the country yields were between 30-50% down on last year – with some even worse hit. This was down to poor flowering, small berries, small bunches, therefore uneven development generally.

In the winery at Hattingley the wines all finished their fermentation before Christmas and those tanks that were co-inoculated with malolactic bacteria are now just coming to the end of that stage.

The malolactic fermentation sees the introduction of bacteria that convert the harsh green malic acid into softer lactic acid. The result is a more approachable wine, hopefully becoming ready to drink sooner than wines that haven’t gone through the conversion. The total acidity can drop by several grams per litre, making all the difference to the final taste.

In England it is often tricky to get the MLF started because of our high acid levels and subsequent low pHs – bacteria don’t like very acidic environments. Indeed, high levels of malic acid can cause the bacteria to fail, simply because there is too much for the bugs to cope with. This is particularly a problem for new wineries where there are no indigenous bacteria naturally acclimatised to the conditions

The next stage is to taste and blend the wines before bottling in the summer.